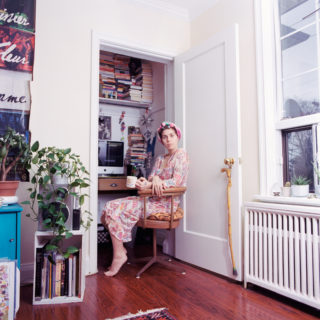 Meg Remy might just live in the perfect apartment

In far west Toronto, at one of the final stops on the subway, Meg Remy lives with her husband and collaborator Max Turnbull, who also records music under the name Slim Twig. Meg describes her quiet neighbourhood as “full of mostly old people” and she’s happy about how unhip it is.

Inside her place, there’s everything you’d expect to find in the home of US Girls – an outsider pop project that, over the course of ten years and six albums, has quietly and fully embraced a life of DIY creativity that goes hand in hand with Remy’s true rejection of consumerism and her fight for gender equality and fair pay for musicians.

To say there are books everywhere suggests there’s no order to them, but that’s not the case. The shelf above Meg’s computer is strictly for books that have already been read; the cupboard in her bedroom is for all those that haven’t. The stack on the right is of plays and scripts; the doorstep ones on the tree stump table are by other strong women like Yoko Ono and Clarice Lipsector. There are books for reading, books for studying, books for making flyers and T-shirts, books for elevating rubber plants. They’re partly responsible for why Meg and Max live without an Internet connection at home. “The conversations we have from reading are far greater than if we vegged out online,” she says.

Elsewhere, neatly collected photos and original artworks point to a resourcefulness that’s seen US Girls go from looping droning cassette tapes into an experimental strand of hauntology to new album ‘In A Poem Unlimited’ – something far easier on the ear than those early records informed by relationships with bad men, drugs and depression. It’s Meg’s second album for 4AD, where she continues to sing like Ronnie Spector, and also Kylie Minogue when her voice softens and Toronto collective The Cosmic Range slip into shronky lounge (‘Rage Of Plastics’) and down tempo disco (‘Rosebud’).

It’s the first time that Meg has collaborated with a live band, although when you’re mistaking ‘Mad As Hell’ for an ABBA/Shangri-Las cut-n-shut, don’t think that she’s singing ironically. For all of ‘In A Poem Unlimited’ new glitter and sheen, it remains an album of women grappling with power and dark reflections on acts of violence.

I’ve always been a fan of turning closets into extra rooms. We don’t have that much stuff, so I turned this one into my office. I’m here every day. Or I’m at the library because we don’t have Internet at home. I work on something in the closet and then I go to the library and I send it there. Last year we finally bought a TV, but we don’t have Netflix or anything – we get movies from the library, because you can order them in and they’re free.

I mean, we have our phones for the Internet, but we don’t have enough data to be on them all the time. When we’re on the Internet we’re on it for a purpose – we can’t veg out on it. We both know that we would be susceptible to looking at shit we don’t need to on YouTube, so let’s just take that out of the equation. 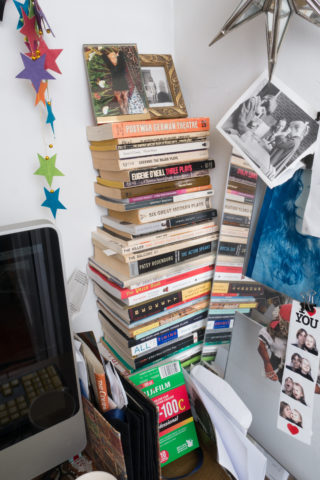 These are all plays. I got into reading scripts a couple of years ago. I didn’t know anything about theatre and had never really seen a play before. I made a bunch of notes and started reading a load of plays. Playbooks are so cheap, and you can get, like, all of Pinter’s plays in one book for 10 bucks. I like reading dialogue and how it flows, and using my mind to make the pictures of what’s happening. It grabbed me.

This is a photo of Frank Sinatra visiting a kindergarten, and he’s trying to talk to a little girl and she’s just crying. I think it’s hilarious. I’m a fan of Frank Sinatra’s music, but I think that the idea of him, this original heartthrob… I don’t know… he’s this good looking, talented man who can then go off and do whatever he wants and he’s going to be protected.

There’s this saying where I’m from, of ‘you can’t fool kids and you can’t fool dogs,’ and I think it’s true. Kids know when something’s up, and this girl is crying, and that probably bothered him. 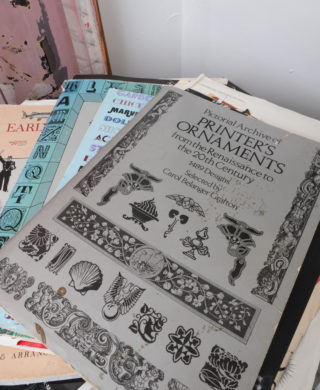 These are full of little images and fonts, and I use these for all the design work that I do, when I design stuff for other bands – flyers or US Girls shirts. You can scan them in, use them in Photoshop or you can Xerox them. I did the Darlene Shrugg album artwork with these books. 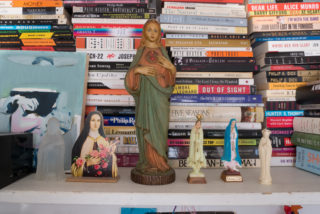 These are a hangover of my Catholic upbringing. I’ve picked these up from all over the world, travelling. There’s a glow in the dark one from Portugal that’s super funny. You can always find a Mary somewhere, but I can’t explain how the Mary thing started. My grandmother had them and my mother had them and now it’s almost like a tradition… something that I feel guilty about, y’know what I mean? The Catholic religion is beyond anything that I can comprehend, and I’m completely against it, and yet I almost fetishise these little totems of this woman. 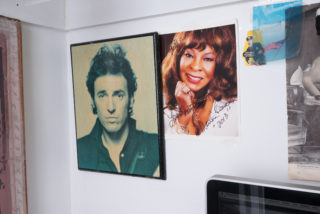 I use to mention Bruce Springsteen in interviews and when I was onstage to put it out there that I’d love to meet him, but it’s still not happened. But my Bruce obsession has dwindled a bit – not with the music, but, y’know, he’s the perfect example of when art and commerce meet. I have a hard time getting over the fact that he’s stock-piled so much wealth, so don’t ever look up peoples’ net worth – that’s what I learned. I was like, ‘I wonder how much Bruce is worth,’ and then I looked it up and was like, ‘Oh fuck! It’s like 300 million. I’m sure he gives a lot, but you could give more, because the thing with all these people is it’s still coming in each year. Forget the new albums and tours, just the back catalogue! I just don’t understand why he’d keep so much. You can’t even spend it. It’s almost as if you could give everything away because it’s just going to be replaced.

The thing is, he’s legitimately worked hard and had some luck and got to where he is, and so that’s the perfect story that the Powers That Be want to instil – there is inequality, but it’s up to you to overcome it. If you want to pick yourself up by your bootstraps look at Bruce Springsteen. I think a lot of people who like his music and go to his shows have gotten into that idea. We have to!

Martha Reeves played at a free show with Smoky Robinson in downtown Toronto and she was way better than Smoky. Beyond! She was giving autographs after the show and it was pretty amazing to see her up close – all of her jewellery, and to hear her speaking voice. She was pretty sweaty having come off the stage, and this is a pretty Photoshopped photo, but hey – she’s earned the right to do whatever she wants with her image. She was super sweet. I don’t think I said anything. She was in control. 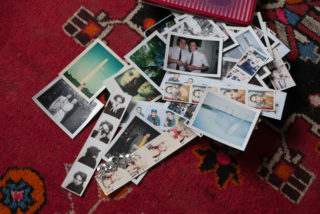 In this tin box I have around 15 years worth of Polaroids and photobooth photos. There’s one real photo booth left in Toronto, where the images are developed in there while you wait, where all four shots are different. It’s in a mall near where we used to live and I used to do all of my press shots in there. I’d hang up a different background each time and send them off to the press. A whole shoot for three dollars. 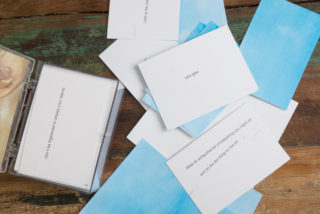 I made these by hand. Brian Eno does sell them, but they’re too fucking expensive. They’re over 100 dollars. Mine are exactly the same because I just printed the list off of the Internet. The way they’re being sold for so much money almost feels antithetical to what they are. Hopefully he won’t sue me, although maybe if he sees this photo spread it’ll make him think twice about charging so much. 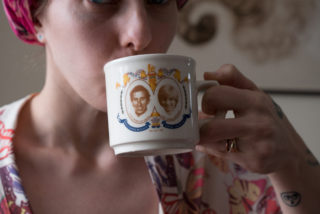 I kinda collect Diana stuff in the way that I collect the Mary stuff. That comes from my mum as well. Diana was kind of the patron saint of divorced ladies. She gave all the divorced ladies hope that they would actually get better when they left their husbands. I guess it started when I was touring in the UK, and, like Mary, that’s another person who was distorted for other people’s motives. 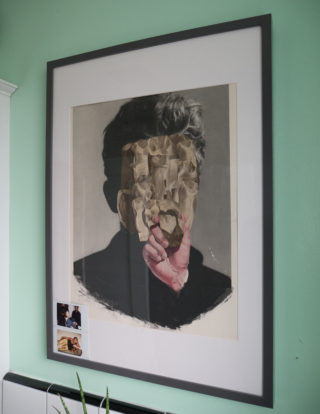 I made this piece for Max. It’s a print of James Dean, which I found out in someone’s garbage. It was too nice to just throw out so I took it home and made this. I had an old Montgomery Ward catalogue with this lingerie section in it. It’s just a funny visualisation of a man thinking about women’s bodies. 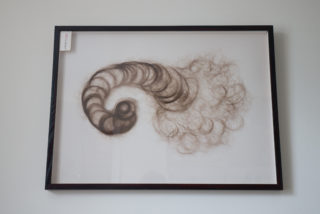 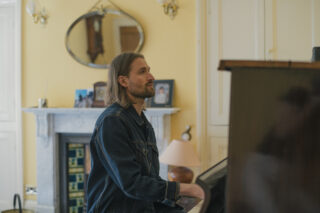