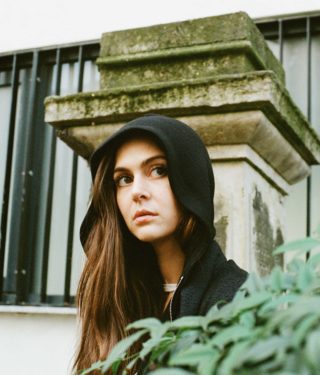 There’s a deliberate timelessness to Vera Sola’ songwriting. Full of gothic imagery, Morricone-esque guitar and lingering vocals, there’s a sense that the songs on the singer and multi-instrumentalist’s debut album, ‘Shades’, could have been written anytime between the first wagon arriving in the west and Trump’s election.

Half American, half-Canadian, Sola – known to her friends as Danielle Aykroyd – grew up in a world not dissimilar to that of her songs. As a child she attended rodeos, read tomes of great American literature and played the piano, refusing to learn anything but the hardest pieces. Her family home in Canada – a building that’s been passed down through her father’s family for generations – has a history of spiritualism, thanks in a large part to the work of her paternal great-great-grandfather. “[He] was a full trance medium. He would hold seances in our family home in Canada,” Aykroyd, explains, sat on a bench in London’s Old Truman Brewery, ahead of a show at Rough Trade East this evening. “He was a forebearer of the spiritualist movement in Canada, he studied Sir Arthur Conan Doyle and all these folks over here who were doing that, but he was also a theologian and a researcher.”

That sense of spirituality “went down through the generations” she continues, where it merged with a love of writing, theatre and later film (Aykroyd’s father is Dan Aykroyd, the actor and writer best known for Ghost Busters and The Blues Brothers, who is also a renown spiritualist himself), creating a legacy of actors, performers and writers whose work balances the spiritual and ruminations on modern society. “My grandfather is a theologian and historian and an engineer, but he’s a writer really. He’s 97 and finishing his tenth book. He’s completely blind but dictating it from his bed.”

Her mother’s side is just as unique. While Aykroyd describes her lineage as mostly “cowboys and Indians” (her ancestors are equal parts Cherokee and buffalo hunter), she also reveals over the course of our conversation that she’s a direct descendant of Bat Masterson, the sheriff of Dodge City and Wyatt Earp’s co-deputy. A renown gun-slinger, buffalo hunter and, as she puts it, frankly, “a killer”, Masterson was an associate of Buffalo Bill and the basis for the main character, Sky Masterson, in the short story collection and musical Guys and Dolls. As if that wasn’t cowboy enough, a few minutes later she reveals, “Dolly Parton’s my third cousin.”

Suffice to say then that Aykroyd’s work as Vera Sola is as authentic as an album of near-paranormal poetry and saloon tunes can be in 2018. While many musicians have flirted with cowboy imagery and dark spirituality, few could lay as valid a claim to the cultures of both worlds than Aykroyd. “I felt a lot of things coming through me and a lot of energies coming through me recording the album,” she tells me later. “It makes me sound totally crazy, but I felt like I just opened myself up and let be.” The themes and atmosphere of the record are so tied to her life that Aykroyd decided to record and produce every note of ‘Shades’ herself. “I just wanted to funnel the energy of this time in my life without any outside influences,” she says of the decision.

The result is a record that’s equal parts terrifying and beautiful. Recorded in St Louis, a city vital to the westward expansion of the United States, ‘Shades’ reimagines the Southern Gothic literary tradition through a spiritual and feminist lens, weaving tales of neglected women and hateful men while leaving enough space for the ghosts of both Aykroyd’s and North America’s past to coalesce. In places, such as the opening funeral march of ‘Circles’, it is utterly chilling. “I’ve always been a scary woman,” smiles Aykroyd, who is anything but scary in conversation. “Being a strong woman, especially a small strong woman, is weird to people,” she laughs, explaining how her unconventional background and general demeanour have conspired to leave her somewhat outcast in the modern world. “A small woman with a deep voice is confusing, and people don’t know what to do with things they’re confused by. 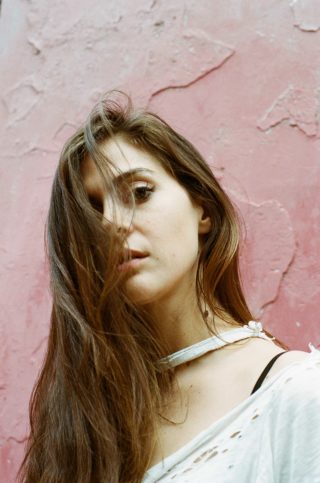 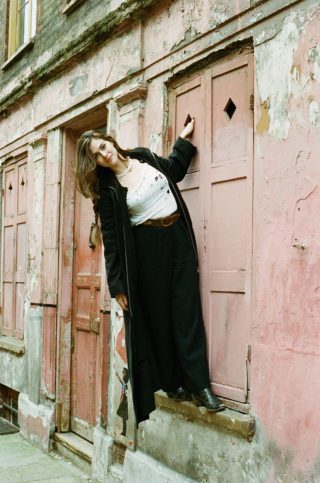 ‘Shades’, it should be noted, is not a concept album. While many of the songs centre on fictional characters, the record is very much born out of Aykroyd’s personal experiences. Aged twenty-seven, for most of her life she says she was too shy, too restrained by other people’s expectations of her, to embrace the voice that comes through so clearly on her album. “Engrained misogyny over the years brought me to the point where I was 27 years old before I made my first record,” she says, looking back to 2016 when the idea of even showing her music to other people filled her with fear. “I thought I couldn’t do it.” It wasn’t until January 2017, after an “insane cataclysmic shift” in her life that she decided to record some of the songs she’d been writing during time spent in New York. “Everything broke down, I lost my job, my mom got sick, I wasn’t touring anymore, my whole life fell apart,” she says.

In the studio she found a way to exorcise her demons, and as we talk, she’s keen to point out that while ‘Shades’ is an undeniably gothic album in places, not every track is as dark as it first appears. “This record is scary, but there are jokes in there,” she insists. “The whole last song is the saddest song I’ve ever written, and it’s entirely made up of inside jokes.” Similarly, she’s aware that there are elements of the album that might come across as pretentious, especially once people find out about her parents. “There’s a complete self-awareness to the melodrama of the album,” she laughs as I gently broach the subject. “If there’s a moment where it’s like, ‘oh my god, really?’ I promise you I’m doing it with self-awareness and a smile. I’m aware how pretentious it sounds when I talk about it, I’m doing it with laughter. I’m also just being myself,” she says. “I’m a pretentious person, I love big books.”

Listen carefully to her music, and between the twangs of southern guitar and haunted cabaret vibrato, the provenance of Aykroyd’s music will emerge. Whether it’s the Bauhaus-esque opening riff of ‘The Cage’ or the almost post-rock crescendo of closing track ‘New Nights’, on closer inspection her album is as indebted to the modern world as it is to the old west. “The engineer who worked with me on the record said, ‘I would have told you this at the start, but did you notice that the harmonies on ‘The Colony’ are similar to the harmonies on Coolio’s ‘Gangsta’s Paradise’?’” she laughs. “I was like, ‘that makes so much sense!’ that was my favourite song when I was like nine!”

Rather than dilute the impact of her music, this mix of sincerity and self-awareness only furthers the uncanny feeling that lingers over it all. That evening at Rough Trade, Aykroyd inhabits the stage like a Westworld android gone rogue; a living anachronism, capable of both run-of-the-mill stage banter and of occupying the characters of her songs with full force, moving as if possessed by them as she performs. Staring straight ahead, her gaze wide and distant, she sings songs of ghosts and grim tales, cantering drums and dusky double bass plodding dutifully beneath her voice. Every now and again her top lip curls like Elvis and her voice commands the attention of the room before folding back in the rhythm of her southern gothic blues.

“Whether you take it as a psychic thing, a personal energetic thing or a performative thing, I consider myself a channel,” she tells me. “When I’m on stage I let go of this person you’re talking to and let in whatever comes in, I take on different characters and slip into different feelings and spirits.” Witnessing her perform in London, thousands of miles from the roots of her music, even the most sceptical audience member could feel some of the spirits of the old west fill the room.