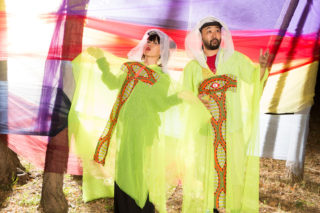 Shigeru Ishihara and Kiki Hitomi are globalising... in a good way

“You know there is such a thing as good globalisation,” Shigeru Ishihara politely informs me as his friend and musical partner Kiki Hitomi joins in: “Of course we are both Japanese but we have lived in London and Germany as well so we’ve naturally absorbed things from different people and we hope that this comes across.” Judging by their well-mannered and convivial nature, I’d say that it most certainly does. “We are globalising in a good way!”

Kiki and Shige make up WaqWaq Kingdom, an indescribable outburst of artistry that’s really quite hard to put into words. You could simply label them as tribal bass but it would be fairer to say that WaqWaq Kingdom is a culmination of each individual’s journeys and more than just a dance duo. “Well yes,” says Kiki. “My first music project was called Dokkebi Q – it was dubstep. At that time I hadn’t sung anything in front of everybody – I didn’t know anything about the music scene – but based in London dubstep was rising up at the time. Then I moved onto King Midas Sound, where I learnt so much from Kevin Martin (the Bug) and Roger Robinson. Now I am with Shige (DJ Scotch Egg), I think about not just making music but how we present it, that’s really important for me.

“Kevin was picturing the imagery of King Midas Sound as well as the music so that element I have taken to WaqWaq Kingdom. It’s great that all the study from the other bands now translates to working with Shige.” Right on queue, Shige speaks up. “Let the man talk, Kiki,” he injects, with a quiet civility that makes everyone laughs. “Kiki is really easy to work with, she listens to me, she always brings good ideas. I can be really honest with her; if I don’t like something I can just tell her and she doesn’t take it personally.” Having worked with so many strong willed artists in the past, Kiki seems to relish this personality trait. “I really appreciate how open minded he is but also he tells it like it is. We are both Japanese so we share a lot of history, how we grew up, our influences, our language.”

The difference between this project and Kiki’s former direction with King Midas Sound is apparent from a first listen to WaqWaq Kingdom… and you will remember that first listen. “This new work I am more honest about myself and my Japanese background,” Kiki says. “For King Midas Sound I sang mostly in English but this time I wanted to bring the Japanese vibe and I sing a lot in Japanese. I really want you to feel that energy and my lyrics use ancient Japanese philosophy.” That blend between Japanese heritage and the contemporary can be felt through every surprising electronic beat of the upcoming album Essaka Hoisa – their label Phantom Limb are calling it Minyo footwork. “I didn’t write that!” jokes Shige, who likes the music to be open to interpretation. “Well, Minyo is in our blood,” says Kiki. “It’s Japanese folk. When we have a Matsuri festival it’s always on so we have been listening to it since we were children. I never felt Minyo was a cool thing though, you know? Once I moved to Europe though, I felt the Minyo side more deeply. When you record something you record a hype track, you know, vibey stuff, yo, yo,” she continues to chant, but this time in Japanese. “That kind of vocal I use a lot for vibing us up and I thought that’s really interesting for European people to hear that, so I am being more honest about where we come from. Shige’s beats use a little bit of footwork or trap, so I think that’s how it is being described. As you’re listening though you can hear all the elements of other music.”

A career-long magpie, Shige is well versed in plundering genres as DJ Scotch Egg. His love of gabba music translates to WaqWaq but here he’s also added influences from travelling to Africa, and of course his Japanese background (plus colourful dashes of 8-bit techno and dancehall), to create something that fuses old and new, though he’s quick to correct me when we say it sounds intentional. “No, no, I didn’t intend to do so, it came naturally. We are already interested in old traditional music so it came naturally, certainly nothing was planned that way. Music exists to escape the ups and downs of everyday life and a lot of that came to this album. We really did keep it positive.” 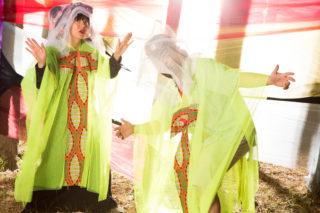 Positivity is a strong through-line in Essaka Hoisa, which is conceptually about the rejection of materialism, and an attempt to control our greed. Even the title is an optimistic Japanese mantra made to keep you smiling. “I want to enjoy the process rather than get to the destination, says Kiki. ‘Essaka Hoisa’ in Japanese is normally at Matsuri festivals – you have miniature shrines which maybe 20 or 30 people are carrying. It’s so heavy, and you have to do this for a couple of hours, so you need a word, a vibe, that keeps the sprits high.” Kiki begins to chant for a second time, repeating the album title Essaka Hoisa over and over. “On the rhythm, you know.

“Life isn’t just happy things, there are sad things and Shige is always there for me,” she says. “We talk about personal things and he always helps me out, and I feel we are a good team.”

When I ask if making the album was a struggle, Kiki replies with her usual openness. “It was hard but there was a good balance, yin and yang. If it’s too hard then I won’t be able to carry on but there was a happiness too. The opening track was about losing my parents last year and Shige helped me a lot to escape to the music world – if there is no musical output then I would probably go insane. We fight of course but the next day we are best friends again.”

If the music is constantly evolving and taking on new cultural influences and forms, then so is WaqWaq Kingdom’s aesthetic. I’m not sure that I’ve ever seen such bright colours across every aspect of a project’s output, not just in its music, but in Kiki’s illustrated cover art too, which depicts her and Shige as kago carriers, two people carrying ruling-class or religious dignitaries over great distances. “I wanted to bring the total experience, with the visuals I created being something that I wanted to do for a long time. Colour, lighting, costume wise, I always like to prepare, I always had a dream that I could wear the same clothes as a partner on stage, like a duo, so I am really happy about that; it’s a really psychedelic look and the music is syncing together with the visual. Shamanic but urban, we wanted the decoration to go with that music, trippy and hypnotising and after the show you go wooooo and all the negative feelings are gone, positive feelings are back.” Shige’s trips to Africa, where he’s due to go back to before the end of the year, have also heavily influenced their vision. “For sure it was African inspired too, a big happy vibe,” he says. “So by fusing all these different cultures we are able to present what we do – the costumes have an African feel alongside Japanese, so mixing everything is essential.” Good globalisation everyone agrees in unison, as Kiki finishes, “the more we explore the better we will be. Practicing, and finding something new.”