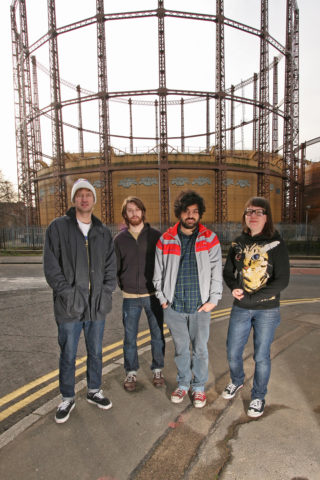 Perched on a step, a fireplace and a tiny creaking cabinet, the three members of Wet Paint that we’ve managed to corner are contemplating what to say in their first interview. Of course, with three of them branching off from the baritone twee rockers, Absentee, and one plucked from Economy Wolf you’d think they’d be comfortable with the press, but their faces reveal nervous smiles and their fingers fiddle with hems of garments.

Barely touching on two years since their formation, they’re already prepared to release their debut album, ‘It Rots’, and have bagged a tour with Bloc Party. “For us it’s just, I don’t know, lucky; perfect really,” says drummer, Melinda Bronstein from behind her NHS specs, while grisly-haired frontman Babak Ganjei ‘ums’ and ‘ahs’ in thought. “We kind of know them from around the same places,” he stutters. “The thing is, it’s a musical community and we help each other out.”

Not only did Babak go to school with Bloc Party drummer Matt Tong, he also worked at the Soho Curzon cinema with their effervescent vocal maestro, Kele Okereke. So, with the onset of entertaining huge crowds every night, have the butterflies begun multiplying in their stomachs? “I think they’re perfect gigs to do if you’re first on because there’s a guaranteed crowd of kids,” Babak utters with confidence. “Some of them will have never seen a band and you may be the first. I’ve been there. In my youth we’d go to the front and we weren’t leaving. None of those people are leaving. Actually,” he contemplates, eyes flickering at the thought of a thousands-heavy crowd “it’ll be quite easy. It’ll be on a massive stage with a massive PA.” But that doesn’t prevent people booing. “But we’ll have a massive PA. We won’t be able to hear them,” he reiterates as they all have a chuckle and guitarist Laurie Earle feels the need to justify their existence. “Lots of people have a broad musical taste,” he says. “Not everyone who goes to a Bloc Party show is only going to listen to Bloc Party or similar artists. You’ll pick up some people who are into it and you’ll pick up some who’ll go, ‘Fucking hell, they were a racket’.”

This must mean that Wet Paint grew up on a wide range of music, drawing influences from all over the shop to create the grungy, new wave Pavement-inclined pop of ‘It Rots’. Melinda admits to absorbing a heavy dose of synth-addled Yaz and The Beatles, while Babak tries his best to avoid responding and Laurie confesses to an obsession – “I spent most of my youth listening to Nirvana and nothing else. When I was talking about kids having broad music tastes…” He attempts to continue but he’s cut off by bursts of laughter. Timidly, Babak almost breathes out his love of “Smash Hits pop”.

“See, I had pretty bad musical tastes,” he begins. “Until I was 12 I listened to a lot of really bad pop, which I’m really embarrassed about. Like… maybe I’ll just leave out…”.

“Go for it,” Melinda butts in eagerly.

“Really?” he questions coyly. “Because the things is… I listened to a lot of Wet Wet Wet and now we’re called Wet Paint and people will think there’s a reason…” Babak trails off dejectedly.

Economy Wolf may have been on break last year and The Bronsteins (Melinda’s third venture) were seeing little action, but with Absentee releasing a single, EP and their third album, ‘Victory Shorts’, the majority of the band have hardly been at a loose end. It’s difficult to imagine how they all found time to fit in yet another project.

“If I’m honest, I always wanted to play loud stuff,” Babak explains. “Then I [had] a baby and it panicked me into actually doing it. [And] we had a shared interest. James [Wignall, bass] was like the happy median between what we were doing in other bands. He was on the – see he’s not here and I’ll get in trouble to call it shoe gazey – but, he was on one end of the spectrum and we were at the other end with Absentee, and [Wet Paint] is in the middle.” Melinda describes how she got into playing drums for Wet Paint as a favour until it morphed into a full time role. “Loud, live guitar music needs drums to keep it going. [Babak had] written loads of songs anyway and I was like, ‘Yeeeeaaahhh, I’ll give it a go’,” she drawls before losing her footing and slipping from her precarious position on the cupboard.

Their Andy Dragazis (Blue States) produced debut was recorded in just two sessions where the band hammered into their instruments without considering the end result. “We didn’t really know that it was going to be an album at the time,” Melinda clarifies. “We just wanted to get all the songs down. Then we suddenly realised, ‘Hey, there’re enough songs here [for an album] – look at that’. But you can tell that it’s all done at the same time.”

“It’s kind of like going backwards,” interrupts Babak. “We haven’t held out to get signed before recording a super slick record, we were just going to document everything and then it turned out to be the record. And in the old days all first albums were – I don’t want to sell it short – but people progressed, the next albums were better and you could hear the developments. Whereas now it seems to be that everyone is putting out the best stuff and then stuttering after two or three albums. So hopefully, this is just a good launch pad.”

A launch pad as good as any – it’s full of gentle riffs and mellow vocals contrasted with social and political instances such as school and environmental issues and the Russian revolution. “There’s quite a lot of culture stuff in there but I tried to hide it all,” Babak enlightens us as he explains the inspirations behind the record. “I’m quite good at whining and a lot of it is trying to justify that by putting it in songs rather than whining at my girlfriend. And because I’ve always been embarrassed about writing lyrics I used to take films and then try and write words based around them.” Somewhat borrowing the concept you could say. “Kind of, because then I could always say ‘Oh, well it was that film’ [if criticised].”

And needless to say they all write the tracks together, but it’s not always a smooth course. “Sometimes I’ll have written verses and verses and James will say: ‘Scrap that whole part of the song’ and I think: ‘But that’s where all the words are’. So I have to go back and keep re-jigging. I’m not that precious that I say: ‘No, this has to stay’. I’ll go and…” “Sulk about it for a bit…” interjects Laurie, grinning as Babak ignores him and continues. “And then cut it all down and come back. Some songs we nail in a day and other songs – like ‘Save the Whale’, which is one of our oldest songs – went through six different versions in a year.”

So now that they’re ready to hit the roads of the nation, convincing people of their worth, what are Wet Paint hoping for this year? “Hopefully to just keep going round the country impressing people and then recording more stuff.” Says Babak cheerfully. “We’re already playing new songs. I’ve never had a strategic brain. I’m always ready to whack it out as soon as it’s done. I used to sit in a bed-sit with a little drum-machine-four-track-thing recording songs. I would always record them, put them out and move on. So hopefully, who knows, maybe three albums in the year,” he grins enthusiastically. “If someone’s willing to put them out and it doesn’t bankrupt me, I’m happy to do it.”