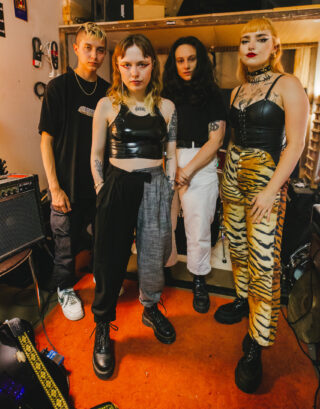 It’s easy to snub horror as something that only rears its mask-adorned head once the leaves turn orange and smashed pumpkins decorate the streets; something dispelled by a simple flick of the light switch. The Manchester four-piece Witch Fever, however, are living, seething proof that horror is far from a seasonal gimmick. Rather, it lurks all around, and while our backs are turned, it is being harnessed to ground-shaking results.

“I’ve always found inspiration from horror imagery,” says lead vocalist and lyricist Amy Walpole. “It’s such a potent genre that can be really interesting to work with, because – when it’s done right – it does a really good job of highlighting or holding a mirror up to oppression in society, and to fucked up things that are actually happening that aren’t fiction.”

With their name referencing the Salem witch trials – drummer Annabelle Joyce is keen to situate them in relation to wider misogyny and the historical oppression of women – Witch Fever have spent six years honing their sound: punk rock that pits sturdy guitars against Walpole’s snarling, pitch-leaping admonitions. Within that time, Walpole, Joyce, guitarist Alisha Yarwood and bassist Alex Thompson have clawed their way up the DIY music ladder, steadily swapping microaggressions for milestones.

“There was one time, we got a text, and there was a band that started playing one of our songs at a gig, taking the piss out of us – that was fun.” Amy laughs wearily at the band’s early gigs while the four members were students at the University of Manchester: “People often underestimated how heavy we were gonna be because we weren’t all men,” she says, “and we would end up on lineups with three indie bands or pop-rock bands, and then we’d play and it would be so heavy that people would fucking leave the room – like, obviously.”

To an outsider, those experiences seem distant to the band Witch Fever are today, having toured Europe with IDLES, the UK with Cancer Bats, opened for the venerable My Chemical Romance, and brought their riotous doom punk to major festivals. Yet throughout it all a self-deprecating, humorous attitude is a constant throughline of their work, even if the music and visuals tend to scream ‘bloody murder’ rather than ‘lol at me.’

“We’re not writing with the intention of making a ‘hit’ or a hit album; we just write what we really enjoy,” Amy says of their forthcoming debut album, Congregation. They only had two weeks to make the record, but Witch Fever relaxed into the process and trusted their abilities. As Annabelle explains: “Because we’ve been in the studio a few times, I think we were more confident. I think it flowed a lot easier than it had previously.”

Amy doubles down on their pragmatism: “This album was never about finding absolute perfection like [those] bands that spend months and months doing albums… It was about being comfortable with the fact that it is a short amount of time, and just trying to find something that represents the energy of the songs and how we play them live.”

Congregation succeeds in embalming the group’s live performance energy, but there’s also a different kind of energy – the energy and power in Amy’s lyrics. She wrings so much terror from a phrase as seemingly mundane as “Oh my, how you’ve grown,” leaving you to look back on your childhood with disgust. Thematically vulnerable confessionals such as these (‘I Saw You Dancing’) are counterbalanced by confrontational offerings: “I’ll break your nose if you try anything else / I’ll chew your head off,” she spits on ‘Snare’. By expounding both sets of demons, the band have armed themselves with a razor-sharp collection of songs – and a great deal of catharsis – with which to face the next milestone: going full-time.

“I just wanna quit my fucking job!” laughs Amy. “All I want is to be self-sufficient off Witch Fever – that’s it. I don’t wanna be rich; I just don’t wanna work in a fucking kitchen anymore.” The band’s ascendance is a question of when not if, of course – for the cursory attention we’ve lent to horror just isn’t going to cut it here. Witch Fever aren’t about to retreat when the light hits them.