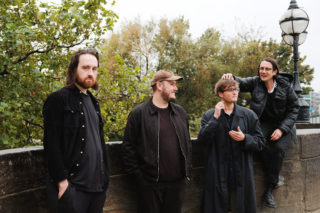 The Leeds outfit have all the ingredients for lasting intrigue

At the risk of being cynical, when a band draws national press off the back of only two songs, it normally means one of two things – they’re a nepotistic industry plant, or they’ve been pushed too far too soon, another one-to-watch that soon falls down the back of the proverbial sofa. Occasionally – just occasionally – they happen to be really bloody good, really bloody early.

In a year where gigs have faded away to non-existence, it would have been easy for a band like Yard Act to slip through the cracks. Fortunately, this Leeds outfit have all the ingredients for lasting intrigue: a whip-smart take on current affairs, a line-up that reads like something of a West Yorkshire supergroup, and a bulging back pocket of infectious-yet-unpredictable songs that satisfy both brain and feet. 2020 might be a write-off for most, but in the Leeds suburb of Meanwood, things are only just getting going.

“It has all happened pretty fast, but I suppose we’re not totally out of the blue,” explains James Smith, the band’s vocalist. “Me and Ryan [Needham, bass] have been passing friends for years – he played in Menace Beach while I was in a local band called Post War Glamour Girls, and we ended up on a split seven-inch together through Jumbo Records. Bumping into each other all the time turned into intentionally meeting up down the pub – we kept saying we were going to start this band, but just never got round to doing it.”

With Needham moving into Smith’s spare room last September, housemate status allowed a productivity that meant early demos could be racked up at speed, finally turning those pub chats into reality. Pinching two extra members from Leeds group Treeboy & Arc, the now four-piece laid down their debut single ‘The Trapper’s Pelts’ with Bill Ryder Jones; a slice of strutting post-punk that manages to recall Nick Cave and Franz Ferdinand while sounding distinctly of the moment. Industry interest was piqued, but a mere three gigs in, everything came to an unexpected halt.

“We came straight out of the gates in January, then headed right into lockdown,” says Smith. “We wanted to keep everything going, so we got Ross Orton to remix this live demo we had as the second single, ‘Fixer Upper’. In the process, Sammy, our original guitarist, actually left. It was all amicable, he just wasn’t really feeling the vibe. Now we’ve got a new guitarist called Sam in, so very little difference there! And that’s pretty much the potted history of Yard Act – the tiniest pot available.” 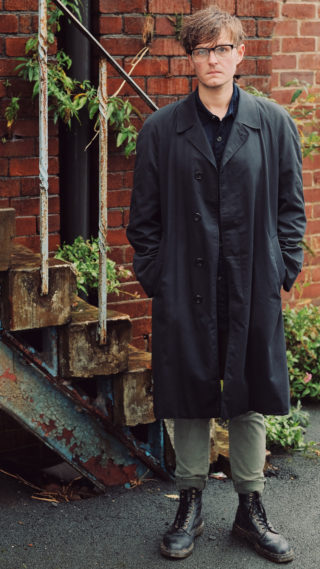 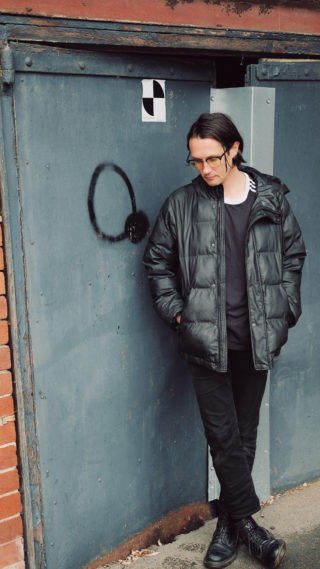 While ‘Fixer Upper’ might have only been intended as a momentum bid, it’s ended up becoming something of a calling card. A satirical character exercise in the same vein as The Streets’s ‘The Irony of it All’, it’s portrayal of neoliberal Britain puts Smith’s spoken word background to fine use, equal parts dark and comedic. ‘Graham’, as he introduces himself in the song, is a very 2020 type of law-abiding citizen, casually racist and gleefully unaware of his own privileges. Although the song was written pre-pandemic, it’s not difficult to imagine that this pseudo-patriotic character would have more than a few opinions on the last few months of political events.

“Graham, for 99% certain, is an ‘All Lives Matter’ kind of guy,” says a wryly-smiling Smith. “I’m pretty certain there are two ways he could go on the pandemic; it’s the Piers Morgan effect. If he’s been personally affected, he’ll be completely against the government who are not doing enough. If he’s not known anyone hurt by it, he’ll definitely be all like, ‘I won’t wear a mask, it’s just the flu,’ because at his core, he’s only interested in himself.

“I’ve actually been writing a follow-up to it, about the people who move into the house after Graham, but I’m not going to try to milk it too much. I’m really glad people have clicked with the character, or I should say, clicked with the portrayal of it as an antagonist in their life. Imagine – ‘Finally, this guy’s singing about what really matters – I’m glad someone’s saying it!’ I hope that’s not it.”

Without signalling themselves as an inherently political band (“I don’t want to tell people what to think”), Smith hopes that each Yard Act song is the start of a conversation, allowing listeners to conclude their own meanings. 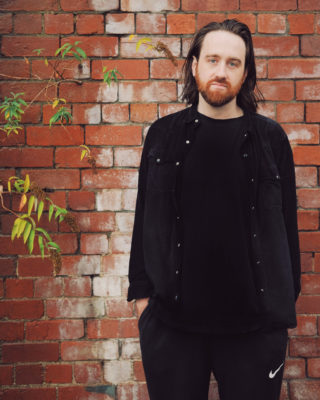 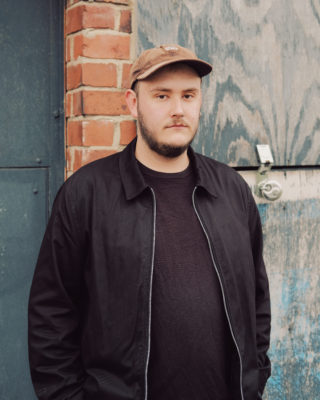 “Music in politics is very prominent at the moment, but it’s all very much like ‘Tories are bad’, and we already know that,” he reasons. “If we’re going to say something, let’s say something interesting. What was important to me with a song like ‘Fixer Upper’ was that I’m going to do the impression, but I’m not gonna explicitly say that that person is wrong. Everyone came to that conclusion for themselves. I don’t just want to pat everyone else on the back and be like, ‘aren’t we all left-wing’, but equally I don’t just want to say something outlandish and ridiculous just to challenge opinions. I don’t feel it’s my responsibility to make any statements but I definitely feel that if I did say anything out of line, I should be held to account for it. I feel I could deal with that. I think if you remain empathic and open-minded, you can pretty much work your way through anything.”

Like the politically outspoken IDLES or Sports Team, it is undoubtedly true that as Yard Act’s star begins to rise, there will be people waiting in the wings to take a pop at their presumed performativity. A recent Facebook comment from a fan who took umbrage at the band’s post in support of Black Lives Matter was a teaching opportunity for Smith, who had perhaps naively assumed that he would be preaching to a progressive choir. “I was really surprised at that response, but then that’s what happens when you sound like a punk band from the ’80s,” he deadpans.

“Some of that older generation still hasn’t moved on, but I suppose the whole point is that it’s good to have the conversation. I’ve seen other bands have it where right-wing fans have questioned their politics, and they’ve basically just said, ‘fuck off then, don’t listen to my music.’ I don’t think I always agree with that. I have that strange advantage as a relatively middle-of-the-road white man where I can Trojan horse into conversations with working-class men a little bit faster than the people that they see as different from themselves and will cause them to put their guard up. So I think it’s important that I don’t wage war on them if I could maybe help them understand. You plant seeds; no one changes their mind in the heat of an argument.” 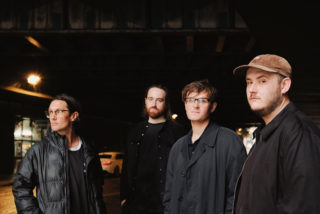 Coincidentally, it’s the planting and harvesting of musical seeds that have brought Yard Act to their exact place of eclecticism. The ’80s punk rock sound that Smith mentions is certainly audible, but it is filtered through all kinds of other retro touchpoints that he carries from childhood – ’90s hip-hop, ’70s Italo-Disco, even a touch of ’00s indie’s more cerebral moments. Seldom suffering from writers’ block, Smith estimates that the band have at least 60 demos on lock: “Whether it’s any good or not is another thing, but I’m not too precious about stuff until it gets to the final stages.”

Listening to the tracks that have reached sign-off status, a groovier approach is quickly apparent, driven by the electronic elements that the band have experimented with during lockdown. ‘Dark Days’ is an instant stomper, a funky slice of art-rock that references A Tribe Called Quest to reflect on the self-punishment of news media doom-scrolling: “That whole pit of despair where you start feeding your own misery.” The other new track, ‘Peanuts’, is an off-kilter murder poem with hints of Alex Turner swagger, made all the menacingly-weirder by its cheerful wild-west whistle.

“That was a joke that just got more and more out of hand,” says Smith. “Sam who plays guitar, his granddad was the world’s most famous whistler, this big showbiz entertainer. His name is Ronnie Ronalde; he just put the ‘e’ on the end to make it sound more mysterious and exotic. Known for his bird whistles, he did this cover of a classical piece called ‘In A Monastery Garden’, and that’s the sample that’s underneath. It’s out of copyright but completely renowned – don’t step to his throne!”

Bird-calling productivity aside, the promise of a full Yard Act album is still a solid work in progress. “We’re still such a young band that I’m happy to let it find its feet,” Smith reasons. “But writing-wise, I’m thinking more character studies, more abstract stuff, maybe a few throwaway fast songs as well, ’cos I don’t just want it to be me just going on constantly. I don’t know if I feel confident calling it poetry, but the spoken word stuff… actually, maybe I will call it poetry, just to annoy poets! There’s been an elitism around it for a long time, and it’d be good to challenge that.”

By way of final thought, he ponders for a moment. When the words find him, they are suitably Yorkshire, a phrase that a certain Sheffield band would be proud of. “If people think they know what we sound like based on those two tracks, they’re definitely wrong.” 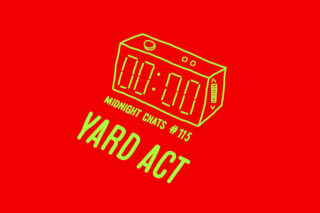 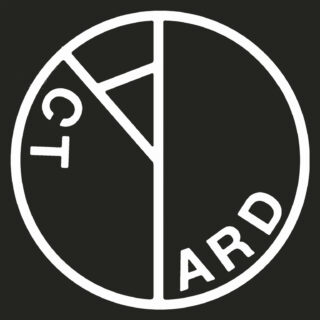