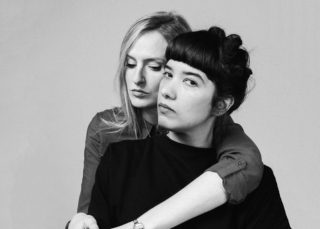 Even when Savages are in full touring mode the band’s members are well-known for occupying their every spare moment with intriguing projects.

But now the London band are taking a short break (Jehnny Beth told Loud And Quiet she’s preparing some solo collaborations this year) there’s room for some of those projects to be shared.

One of the most exciting is KITE BASE, who’ve announced they’ll put out their debut album ‘Latent Whispers’ in May.

The band is Ayse Hassan (Savages’ bass player) and Kendra Frost who’ve been performing for a while.

The duo, who often both play bass in the band, have announced it with a new track, ‘Transition’ which you can watch the new video for below.

It’s a live clip, recorded when they played London’s Electrowerkz at the end of 2016, but with some innovative camera-work going on.