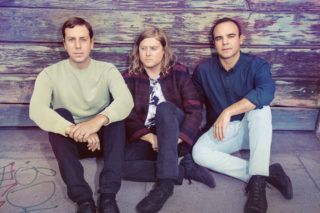 There's a new album coming out in April, called 'The Far Field'

As much as it was fun tracking the progress of Future Islands’ side-projects the last 18 months, particularly The Snails, where Gerrit Welmers and Will Cashion, we’re actually wearing snails on their heads in the photos of the band, it’s nice to have Future Islands back properly.

They spent 2016 writing material, road-testing it under a bunch of fake name shows before recording in Los Angeles.

‘The Far Field’ is their first one to feature a live drummer. But if you listen to first single ‘Ran’ that doesn’t change the feel of things. There’s also a track on the album, out on April 7, that has Blondie’s Debbie Harry guest on it. It’s called ‘Shadows’.