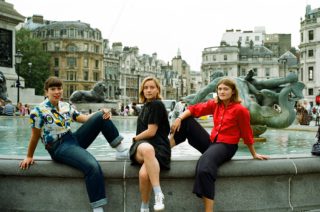 Listen to the latest song from Poppy Hankin, Iris McConnell and Sophie Moss.

North London three-piece Girl Ray released their first single while they were studying for their A-Levels.

Since then, Poppy Hankin, Iris McConnell and Sophie Moss have made rapid work of things. They’ve just recently signed with Moshi Moshi. ‘Trouble’ is their sweet, lo-fi next track, their first physical release. You can listen to it below. The track comes out with new b-side ‘Where Am I Now’ out on 25 November.

According to the band, ‘Trouble’ is about “apathy and hating yourself for trying to win pointless arguments in snakey ways. It’s about turning into someone you don’t like.”

We think it’s reminiscent of The Pipettes, Veronica Falls and Cate Le Bon, maybe even a bit of Whitney. All promising signs for their debut album, which will be released next year.

Girl Ray have got a bunch of shows coming up. Some with Haley Bonar (*), some with Slow Club(#).