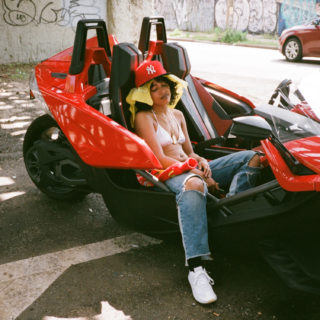 Considering Princess Nokia has been touring the world off of the back of three self-released albums made available on Soundcloud and YouTube, it’s kinda surprising that she’s signed a record deal at all. That that deal is with Rough Trade, on the face of it, seems even more out there – but it really isn’t.

RT – the daddy of UK indies – has a couple of killer reps: as the label of The Smiths and the original wave of indie artists, and as a label revitalised (and revitalising) by The Strokes and The Libertines. “Rough Trade,” you might say. “They do the bands I like.” In recent years though, they’ve made some brilliant and progressive signings that might go amiss as theirs, away from their guitar roots – acts like Anohni, Dean Blunt, Pantha Du Prince, Micachu & The Shapes and, most recently, Sleaford Mods.

New York rapper Princess Nokia fits in much more with that bunch than she does Belle & Sebastian and Adam Green, and today she’s posted this first song from her new deal.

‘G.O.A.T.’ is the debut track of hers to be made available on mayor streaming sites, and considering everything she’s achieved so far without label help, this could be the start of something big for Princess Nokia.

I’m just speculating here, but I imagine, label or no label, her next album will simply fall out of the sky at some point between now and, say, December 31st. Keep an eye out.