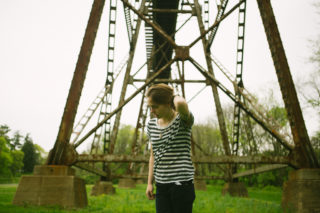 The Memphis songwriter has announced her second album

When Julien Baker wrote the nine songs on her debut album ‘Sprained Ankle’, she thought it’d be a success if her friends at school heard it. Maybe she’d head out on a DIY tour and play a few shows, she hoped. It obviously ended up reaching a lot more people.

It was an intimate piece of work. When Loud And Quiet’s Ian Roebuck spoke to the Memphis/Nashville songwriter last year, he described it as “‘Sprained Ankle’ – an intimate listen of young adult vocals and clean guitar and nothing else – deals with pretty weighty issues, like depression, anxiety and faith, but Julien’s directness still has a lightness of touch that resonates with every listen.” That interview is here, should you want to read it.

Matador Records ended up rereleasing ‘Sprained Ankle’, but now there’s news that Baker’s finished her second album ‘Turn Out The Lights’ and that it’ll be out, again via Matador, on October 27.

She’s just shared a new track from it – ‘Appointments’.