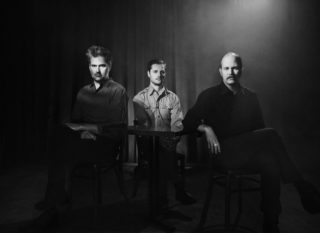 'Grifting' is from their new album 'Sincerely, Future Pollution'

There are few albums that have more play on our stereo so far this year than Timber Timbre’s ‘Sincerely, Future Pollution’.

It’s their fourth, and it’s a corker.

Derek Robertson described it in his review as “stylishly atmospheric” and out on Friday in the UK via City Slang.

Anyway, they’ve just shared a new song from it, ‘Grifting’, which is a bit Talking Heads, a bit Pink Floyd.

It’s also has this snazzy new animated video, directed by Elenor Kopka, who has this to say about it:

“When I first heard the song Grifting it instantly made me think of a swampy seaside village, set somewhere in the 1980s, and a group of people meeting up for a shady basement match of poker. Later on I got very inspired by tarot imagery and the aesthetics of fortune telling and tried to construct a game packed with that sort of occult symbolism. The video ended up becoming an obscure card game session that brings back unwanted memories.”