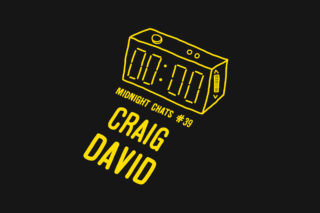 In 1999 I was a 17-year-old going to the clubs of Southend for the first time and talking loudly about my car and kids at the front of the queue so the bouncers would let me in as they reasoned, ‘well, this guy has kids so he MUST be old enough to come in.’ I suppose there is a chance that it was my white jeans that got me into TOTS (Talk of The South), Adlib and Zeroes, or maybe it was just that my money was as good as anyone else’s – the other 17-year-olds inside.

UK garage was blowing up thanks to Craig David‘s and The Artful Dodger’s ‘Re-rewind’, and so my hometown began its three-year love affair with dancing to nothing but two-step beats and MCs in Moschino. By the time UKG was done, so was my taste for Smirnoff Ice, and so that music has embedded itself forever in my life and countless others now in their mid 30s.

Tonight, Craig is the guest on our podcast. Listen below for stories of how it began for him as a 17-year-old himself, what trainers he’s into, moving to Miami and his comeback via his TS5 house parties.

Subscribe to Midnight Chats via iTunes or wherever you get your podcasts. There’s a new episode every other Thursday at 00:00.