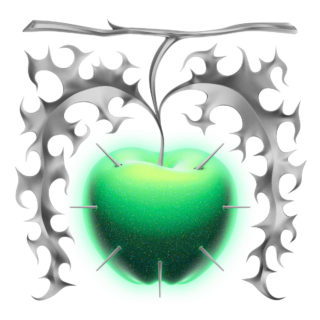 You know you’ve arrived at a godfather level in your sphere of influence when you can release eight albums in the space of five weeks. PC Music overlord A. G. Cook, who seems to be the nexus connecting so much that is hip in popular music in 2020, only just released his 159-minute septuple opus 7G in August, but here in September comes another totally new body of work in Apple.

According to Cook, this record is his tribute to “pure, classic songwriting”, and whilst it is mildly galling to watch someone move from any one spot on the music map to another with such cavalier abandon, sprinkling his alchemical reinvention dust each time as he goes, there is plenty here to support his assertion. There are tracks such as the brilliant opener ‘Oh Yeah’, with its ‘Free Fallin’’ guitar strum, that are straight-ahead melodic compositions, where the hyperpop playground-from-hell antics are dialled back to a minimum. And yet there are also tracks like ‘The Darkness’ and ‘Beautiful Superstar’, which show similar restraint, but with the spotlight so focused on their songwriting core, seem a little underbaked. In post-modern pop deconstructionist terms, ‘Video Killed the Radio Star’ they ain’t.

Apple’s best moments are actually when Cook lets his natural instinct to distort and subvert run free. The manic strobing synths of ‘Xxoplex’ are blisteringly exciting, the chipped jungle beat giving in to surreal baroque choral voices for fleeting respite before Cook sets it ablaze again. The screeching intro of ‘Airhead’ eventually subsides to let a thin, falsetto vocal take the lead, Cook synthesising poignancy out of something dripping in real, organic pain. The fusion of writing and studio play is best encapsulated on ‘Haunted’, where a plaintive, folksy guitar line and wordless, heartfelt vocal are slowly mangled and warped, without ever disrupting the message. Cook is clearly a master of sonic manipulation, but at times Apple proves that the old-fangled classical skills aren’t beyond him either.