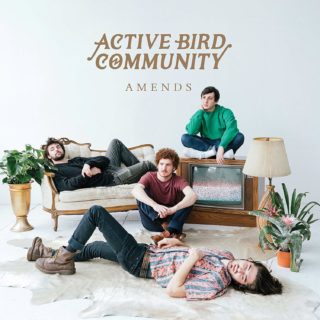 Taking everything that’s great from the past 25 years of emo, grunge and American and UK alt-rock, Brooklyn’s Active Bird Community have pretty much nailed their first proper label-released LP.

‘Unwind’ is one minute The Crocketts’ chaotic delivery, the next Fountains of Wayne’s measured rock with the poppier bits of Jimmy Eat World. ‘Lighthouse’ then has the guitar tone and lo-fi feel of Willy Mason as singer Tom D’Agustino laments his fractured childhood, watching his mother paint lighthouses.

Originating from up the Hudson River, north of New York City, the band avoid the sound of the metropolis. Instead, chiming in on the back of Car Seat Headrest’s rough-around-the-edges approach, the vocals are overreaching to the point of bordering on cracking in anguish, teetering on the precipice of collapse. Of course, it’s this DIY aesthetic and the ramshackle, off kilter performances that gives this record its charm. And with ‘Amends’ being ABC’s first album on Barsuk Records, rather than a self-release, there is just the right amount of production to lift the tracks from their home demo forms, so that it’s just big and bright enough.