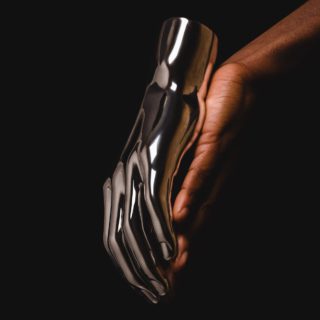 For all the variously depressing and chilling reasons why one might already feel that 2017 is turning out to be a year our future selves will wish they could forget, at least progressive electronic music seems to have fared well over the past four months. In Blanck Mass’ ‘World Eater’ and Clark’s ‘Death Peak’, we have been treated to career-best statements from producers whose elastic approach to genre results in music as viscerally powerful as it is cerebrally confounding. As Actress, Darren Cunningham has repeatedly demonstrated that he too is producer of such calibre, and although ‘AZD’ may not be quite such a significant work (neither in the context of his personal career nor in the wider generic field), it further reinforces his reputation as one of British electronic music’s most consistently vital voices.

Compared to ‘Ghettoville’, ‘AZD’’s bruised, brutal predecessor, this record is leaner, more supple; there’s nothing here that’s quite as uncompromising as that album’s gut-punching centrepiece, ‘Birdcage’, for example. For some stretches of ‘AZD’, this relative lightness of touch is refreshing, but occasionally, I find myself missing Actress’ formerly thrilling lack of restraint. Lead single ‘X22RME’, for example, is diverting enough, but it’s never more than an idiosyncratic synth line away from fading into anonymity.

Happily, towards the album’s end, Cunningham apparently regains his adventurous spirit, with tracks like ‘There’s An Angel in the Shower’ and the utterly beautiful ‘Faure in Chrome’ redirecting the melancholy heft of much of his previous work into softer, more plaintive but nonetheless unsettling tapestries of sound. To these ears, much of ‘AZD’ seems to be building up to its final third, and, for the most part, that’s no criticism – it just sounds like Actress isn’t quite finished with this phase yet. When he is, we’ll have something truly remarkable on our hands.