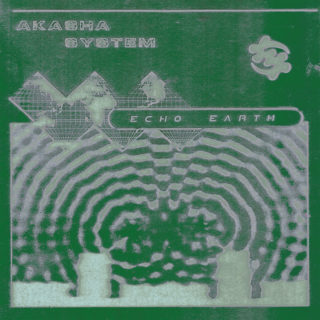 Ambient techno, with its roots in early electronic experimentation and later new age and built-for-purpose meditation guidance, reaches further back to the Romantics. At a time when the Enlightenment was enshrining human experience within the rubric of logic, Keats, Turner and Constable placed the human subject within their environment in painting and poetry. Echo Earth, the first full-length proper by Pacific Northwesterner Hunter P. Thompson aka Akasha System since establishing a name with various techno collectives (Neo Violence, Elestial Sound), was seemingly composed if not directly under tree canopies then surely at a studio just down the dirt road. This is to say, the entirety of the LP’s runtime is quite lovely, with numbers like ‘Hawk Country’ and ‘Rain Theme’ invoking whispering tides and warm, welcoming drum circles.

But Thompson’s romanticism is tinged with loss, signposted by the gently receding instrumentals of ‘Sunken Relics’ and ‘Warped Shadow’. Sonically, Echo Earth could’ve just as easily been made in 1994 — a facet that can’t necessarily be considered a feat considering the more static, less innovative end of the ambient techno spectrum. What’s the use in re-hashing Aphex Twin when Richard D. James outdid his early sound long ago? Nevertheless, what this LP does instead is invite a thematic fixation altogether more prescient to today’s conundrum. As artists and creators (and indeed writers), how do we best re-navigate our relationship with nature, when the 20th and 21st centuries have painfully demonstrated that we are not apart, but a part of our own environment?