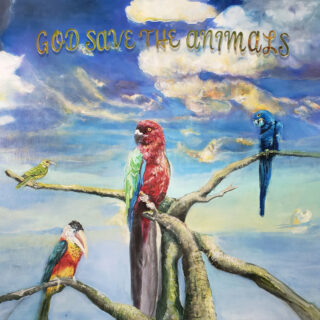 Now on his ninth album, and fourth for Domino, Alex G (real name Giannascoli) continues to trade in a rock classicism that’s been hijacked by Garageband trickery. Giannascoli takes cues from American indie rock prime cuts – think the candour of Elliott Smith and a Meat Puppets crookedness – yet is also enthralled by the possibilities of technological subversion. Like A. G. Cook, his songs often hang on the tension and disconnect between sheen and dissonance.

Speaking of which, hyperpop gets an airing on ‘No Bitterness’, a number that begins ruminative and acoustic before crackling into a revved-up frenzy. It presents indie rock dressed in a modern garb – not one ensnared in retromania – and in so doing distils Alex G’s unique appeal.

True to form his trademark post-internet genre-hopping is correct and present on God Save the Animals. On the cosplaying industrial rock of ‘Blessing’, dread slowly rises as lock-jawed grunts tell premonitions of environmental collapse; this over imposing waves of murky static. That the track is followed by the nonchalant charm and house band ease of ‘Early Morning Waiting’ is a jarring thrill. ‘Runner’ too has an easy-going approachability, and likewise reclines into a wistful vista of alt-country licks.

Yet the tonal shifts that mark his records don’t cohabit on God Save the Animals as easily as they have in the past. ‘S.D.O.S’ tentatively leans into the insular dread that permeated his recent soundtrack work to We’re All Going To The World’s Fair, yet is too tentative to convince. Meanwhile, ‘Immunity’ feels like a placeholder, anonymous with its automated vocals. God Save the Animals is a typically idiosyncratic set from an artist ploughing his own furrow, but it doesn’t entirely fulfil his considerable promise.