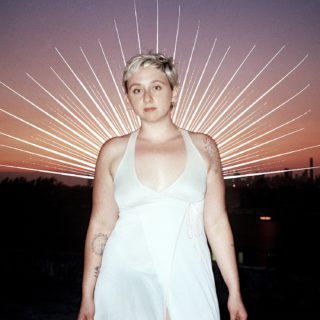 The opening sixty seconds of Allison Crutchfield’s debut album are a thing of real beauty – a cappella harmonies and hints of gospel morph into the beginnings of a song that chimes with faint echoes of Tracy Chapman. Then it all, somehow, goes spectacularly wrong, exploding into what feels like a heavy dose of teen angst by numbers. Indeed, the spectre of Alanis Morisette’s pop-rock monster haunts large parts of ‘Tourist In This Town’, adding a shopping mall flimsiness to what otherwise might have been a decent collection of songs.

There are exceptions; the bombastic, machine-like ‘Dean’s Room’ has a relentless bassline set against a synth backdrop, while the subtle, piano-led ‘Sightseeing’ features easily the album’s best lyric: “I’m so narcissistic I thought you would be obsessed with me.” The song is beautifully engaging, and feels like a midnight walk with a broken heart. But the paper-thin ‘Secret Lives and Deaths’ feels like an afterthought, and in many ways the album is just far too conventional to have any real impact.