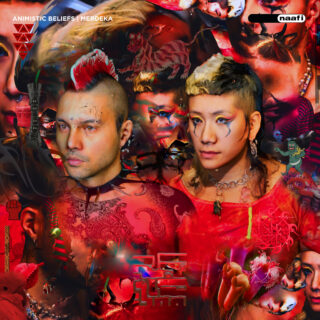 Rotterdam’s Animistic Beliefs aren’t aiming small. Made up of producers Linh Luu and Marivin Lalihatu, their stated aim is to create a whole new musical creole by filtering the hard techno and industrial sounds of the Netherlands club scene through the lens of their Vietnamese, Moluccan and Chinese heritage.

With Merdeka, the pair are throwing caution to the wind. Using Western dance music as a jumping-off point and incorporating more overt South East Asian influences, this album breaks the mould of electronic music and dares us to follow it into some weird and exciting sonic territory. When it works, it works – ‘To Dream About Water’ is a thrilling slice of experimental dance that fuses Detroit-style techno with the Asian touchpoints mentioned above.

However, the album’s moments of genius are often tempered by creative missteps. The transitions between moments of ambient serenity and beat-driven dance arrive like some flipping the station, and the less said about ‘Goblins Caught on Camera’s 2 Unlimited-style synth stabs, the better. Still, the odd stumble is par for the course when you’re trying to curve the trajectory of dance music in a totally different direction. Merdeka might not be the most polished album, but it shows the world that Animistic Beliefs have way more good ideas than bad.