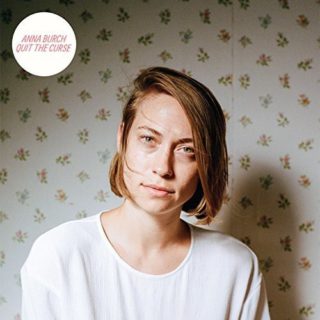 If you like Best Coast but don’t share Bethany Cosentino’s love of cats then you could have found a new musical crush in Anna Burch.

The Detroit-based musician, who previously fronted Frontier Ruckus and Failed Flowers, launches her solo career with an album that re-imagines ‘Crazy For You’ with less neediness. Sweetly infectious confections of breezy pop, the nine tracks that comprise ‘Quit The Curse’ exhibit none of the burn out that led to her quitting music to attend grad school.

Over a year in the making, during which time she showcased some of the material live, the short and punchy release is steeped in ’60s girl group pop as much as it is C86. The title track and ‘In Your Dreams’ are prime examples of this, their reverb and harmonies being a modern update on Sarah Records.

There’s nonetheless a cool realism to her romanticism and tales of substance abuse. “I’m tired of unrequited love stories,” she observes on ‘2 Cool 2 Care’. “I won’t play the victim just because I can’t get what I want,” she asserts on the post-angst pop of ‘What I Want’. It’s this lack of sentimentality that rescues the weeping guitars from overkill on the Rilo Kiley indie-country of ‘Belle Isle’. Likewise it’s her deadpan approach that makes ‘Yeah You Know’ more than just a lo-fi, scrappy version of Haley Bonar.

Smart without giving the impression of trying too hard, Burch’s debut is full of subtle ear-worms and a lyrical intimacy that makes her the girl you want to hang out with at college.