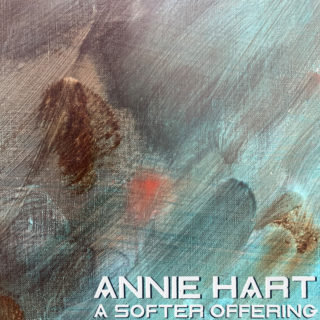 Putting out an album isn’t easy in any month, but in December it really isn’t easy. It’s the difference between going for a drive on an open road and swerving your reinforced tyres through a snow drift. Unless you’re a Hollywood sweetheart who loves the attention that singing Christmas songs in a top hat promises, is there any point competing?

There’s certainly a big-lunged pop song behind most of the nine tracks on Annie Hart’s new record, but the blizzard lights aren’t on full beam. The sonorously sparse folk of A Softer Offering is a stretch away from her work with synthesizer pioneers Au Revoir Simone, playing more like it’s been etched into the dewy breath of a bus window. It’s an oddly warm and comforting companion piece to the shorter days and colder nights.

‘Longing to Care Less’ sounds like a carefree attempt at a Caroline Polachek jam session. A dreamy mellotron glimmer plays through ‘Wilderness Hill’ to ‘Embrace The New Age’, all with a mumbled closed-mouth vocal that feels reassuringly incomplete. Even the most digitized and programmed riffs fizz through mumbled, mistaken notes and slight off beats, as if someone’s playing a New Year’s concert through a vacuum, or a toy piano tribute to Daniel Johnston.

The standout one-two of ‘Clean Floors’ and ‘Phoenicia No Coffee’ is a slow psychic rumination on withdrawal, complete with power line: “the Mefloquine made me crazy but I swear I’m coming back.” It thrums with a spaced out, hopeful energy that claws its way into being a foggy two-chord strum; winter jacket buttoned up, thick gloves on.