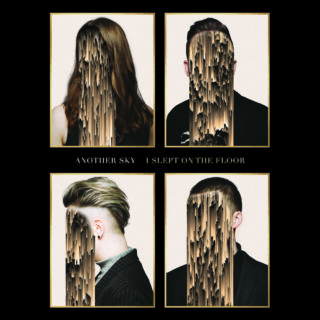 On their debut album, I Slept On The Floor, London indie-via-post-rock band Another Sky seek to encapsulate their experiences in a world that is steeped in hardships. Amplifying their ominous and atmospheric soundscapes with impassioned melodies that emanate a pendulum-like quality, vocalist Catrin Vincent’s vocals fleet between hypnotising falsetto and snarling expulsions of pent-up energy. Like accidentally getting caught up in a spider’s web; her thick, silken tones are a smog of luminescence that divert attention from the disturbing undercurrent of the subject matter.

The dichotomy of the human condition is explored deeply as the album progresses – the softness in the opening moments of ‘Brave Face’ melts away as an authoritative voice emerges (“Fuck being patient or complacent / Only you can demand all that you deserve”), whilst ‘Avalanche’ is a confrontational diatribe directed at those who abuse their power.

The rapturous and euphoric moments often creep out of a subtle, lingering sense of darkness. Vincent taps into the uninhibited, feral side of herself when confronting trauma, dehumanising her voice on the title track in the service of insight and closure. It’s a reverse reclamation in the sense of distancing, almost dissociating, from those moments of darkness.

Whilst there’s a wealth of melancholia on I Slept On The Floor, there’s an overwhelming sense of strength to be taken from it all. Despite Vincent proclaiming that “hope may be a burden in the wrong hands” on ‘Tree’, it’s a reminder that we must all take accountability for our actions and be more attuned to the way we communicate.