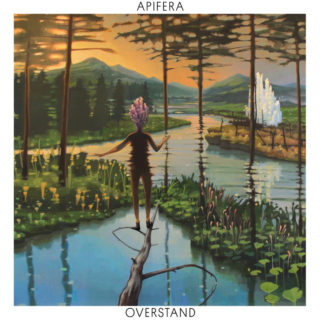 Although this is officially their debut, the four Israeli jazzers who comprise Apifera have hundreds of recording credits between them, something which fast becomes apparent on pushing play here: Overstand isn’t the work of wide-eyed debutants eager to make their mark, but instead, it would appear, a coming-together of accomplished musicians looking to show off – mainly to each other, granted, although the insouciance of much of their playing suggests they’re unconcerned if others listen in. Accordingly, entertaining widdly-widdly noodling abounds, predominantly in the form of psychedelic synth runs and twanging bass licks, around otherwise pleasantly simple song sketches, with emphasis firmly on technique over approachability.

When the quartet play more for the good of the song than their own reputations, though, as on the creeping ‘Yaki’s Delight’ and the antagonistic ‘The Pit & The Beggar’, an album of nicely contemplative cross-pollination starts to take shape, and ‘Pulse 420’ and ‘Notre Damn’ offer welcome warmth and abstraction absent elsewhere. However, most of Overstand drifts by as an exhibitionist’s dream, with songs servicing a demonstration of technical chops rather than the other way around. Sure, there’s nothing to actively dislike, but given the personnel and abundant talent, it’s hard to not view this as an opportunity missed.