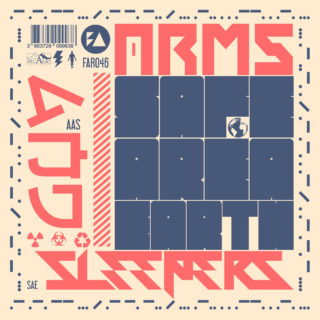 “The Earth is a place that could – and should – be safe for all, but depending on the pure chance of one’s place of birth, the personal relationship with the planet alters dramatically.” Describing the semantic absurdity of the UN-designated “safe areas” during the Bosnian War in the 1990s – that these places had to exist in the first place, and that they actually housed some of the worst atrocities – Arms and Sleepers set out the personal and somber context for their new conceptual electronic project.

Safe Area Earth is the first of six planned releases in 2020 for the trip-hop duo, comprising three albums and three EPs, all based around Mirza Ramic’s childhood travelling the globe as a Bosnian refugee. It’s a return to the subtler sounds of their early releases. The beat-making of ‘Art and Scope’, ‘Ruined by Geography’ and ‘Open to the Elements’ is notably heavier than any of the chill-wave deep cuts of debut Black Paris 86, but shares the quieter moments of grainy distortion and static.

The exposition is unsettling: gently snapping electronics attempt to draw out the human anxiety that comes from recalibrating an identity within an involuntary nomadic upbringing, but their executions vary in success. Sofia Insua’s feature on ‘Leon’ is especially out-of-place, sounding tagged on for a playlist algorithm. Transitions become hurried as the 17-track opus dwindles to an end. The strange highlight is a 21-second coded transmission (translated as “this is safe area earth”). It’s the one time where the composition is audibly grounded in the tumultuous world its trying to translate.