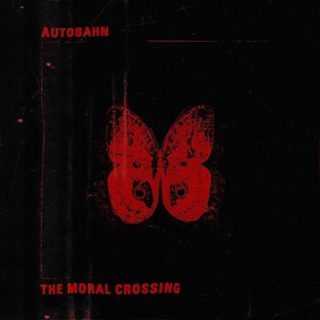 If the autobahn is part of the iconic imagery of Germany, the chimneys and rooftops of the Yorkshire skyline are elements of the north of England’s. ‘The Moral Crossing’ is an industrial landscape straight from the post-punk ’80s of Autobahn’s hometown (Leeds) in Thatcher’s Britain, seeping with Sisters of Mercy vocals and the Joy Division feel that was on the band’s debut album in 2015.

White Lies were bringing a pop edge to their goth delivery a few years ago, while this has a driving, incessant rhythm straight from Krautrock. It moves like the German road. ‘Prologue’ introduces ‘Obituary’ with its spoken word verse leading into a shouted punk chorus. New Single ‘Future’ is a stark contrast with shoegaze vocals that are barely distinguishable under a rolling guitar hook and a stiff repetitive synth riff that precedes the title track, all twitching and paranoid. It begins to feel jaded and more than the ten tracks which becomes cyclical by ‘Creation’. ‘Fallen’ and ‘Vessel’ could be Ultravox without Midge Ure but it all just falls a little and fades away.