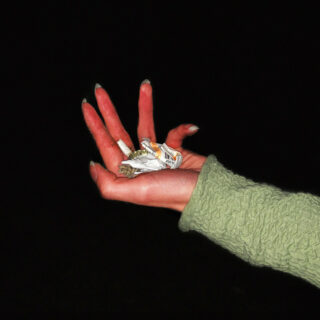 On debut album im hole, Aya (fka LOFT), surely one of the most captivating electronic producers to emerge from the UK scene in recent years, continues her boundless exploration of club-tuned sound design, while developing her presence as vocalist. The project stands as a singular work, imbuing themes of internal doubt and external pressure, questioning ideas of sexuality, gender and identity. It’s the marrying of Aya’s increased vocal presence, and her unrivalled approach to sound construction that navigates these thematic threads in idiosyncratic ways, neither wearing through obviousness, or alienating though opaqueness. There’s no wonder the album’s lyrics have been released as a book of poetry – new meanings are sure to be exposed in print.

But it is the symbiosis of sound and voice where the record’s unique perspective is most captivating; the broken, drunken beat of ‘once wen’t west’ where time stretches like taffy, the layered, pitched vocal following suit obediently. The line between poetry, voice and instrumentation is blurred with simultaneously reckless glee and knowing calculation.

The instrumental tracks reinforce the atmosphere of the record. The grime-adjacent charm of ‘dis yacky’ which ends up sounding something like an early Big Apple Records release, or the gorgeously harmonic plucks of ‘the only solution i have found is to simply jump higher’ that occasionally flirts with gurning acid lines, before altogether detuning itself to jarring effect.

Elsewhere, ’tailwind’, with it’s subsonic force and anarchic take on club trope sounds, feels like Minor Science at his most unhinged, and the wrestling between ambient beauty and sound art menace on ‘If [redacted] Thinks He’s Having This As A Remix He Can Frankly Do One’ is a gorgeous breather. This is a sonically rich album that confirms Aya’s place at the forefront of cutting edge electronic music and promises a future filled with left-turns and intrigue.