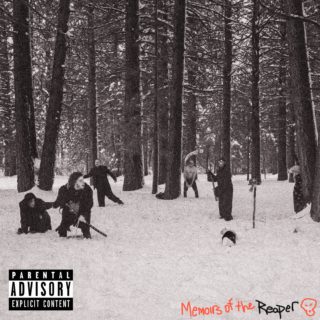 Personally and professionally, everything about Azizi Gibson’s story to date suggests an existence that’s been both nomadic and whirlwind. He was born in Bangkok, raised in Frankfurt and now resides in Los Angeles, via Maryland. In terms of his hip-hop career so far, he’s signed with imprints run by both Flying Lotus and Waka Flocka Flame, only to now go it alone with the independently released ‘Memoirs of the Reaper’. More conceptually detailed than anything he’s done before, it heavily features his newly-developed Grim Reaper persona, which is by turns stirring (on the eerie, off-kilter ‘Lost’, for instance) and misplaced, as is the case on the muddled ‘Freak’ and ‘Sex Message’.

By turns personal and flippant, you get the impression that Gibson wasn’t ever entirely sure what kind of album he wanted to make with ‘Memoirs…’, and the juddery, repetitive beats begin to grate after a while. Still, there’s no question he has plenty of potential, and with a prodigious work ethic, the chance for him to mine it properly is never going to be far away – he just might be better focusing on, say, the chilling atmospherics of ‘Nintendo King’ than on some of the more traditional hip-hop themes that rear their head unnecessarily elsewhere.