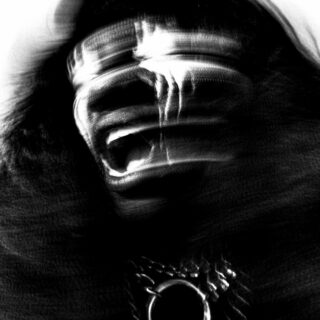 What’s the purpose of pain? If we’re to believe the warped vocal that opens I Lie Here Buried With My Rings And My Dresses, the purpose of pain is to let us know that something is wrong, so we can seek care. “A little bit of pain can be a good thing”, the voice says. And then it repeats, looping the phrase until the words turn acrid. This is an album about pain that refuses to end.

The Montreal-based experimental hip-hop artist Ashanti Mutinta aka Backxwash excels at writing about this kind of pain. Last year’s God Has Nothing to Do With It Leave Him Out of It twisted the pain of her conservative Christian upbringing and the rejection she’s faced as a Black trans immigrant into vital self-expression. She performed backed by samples from heavy metal and Zambian tribal chants, influenced by the very real satanic panic she has experienced as trans woman. It was a story of anguish, albeit one centred on forgiveness.

This follow-up is even more focused and impressive, in part due to the centring that one emotion. These are songs that exist at the edge of annihilation, in demonic fever dreams of and drug binges to numb the pain. Backxwash returns to heavy metal to present these feelings, but the beats are more dynamic and hefty to match her taught and dextrous delivery (instrumental contributors include Ada Rook of Black Dresses, Jonathan Snipes and William Hutson of Clipping, and Speedy Ortiz’s Sadie Dupuis).

At just 33 minutes, momentum is the album’s secret weapon. It carries an earned sense of dread, like there’s no slowing the inevitability of suffering. Opener ‘Wail of the Banshee’ hints at the guttural vocals that are brought to the forefront on the title track, where Ada Rook delivers a career-high performance in terms of intensity.

Then there’s the slow-motion dirge of ‘Terror Packet’ featuring Censored Dialogue. The two tell stories of the distrust that festers after years of mistreatment. “Where was you at when I had to trap to pay for my hormones?”, says Censored Dialogue – matching the venom and openness of Backxwash a verse later (“Back then I took a bump to my face, to feel dead like my government name”). Even here, the sense of doom has a unique and alluring pull. There’s hope underneath the pain on I Lie Here Buried With My Rings And My Dresses. It comes in the form of musical growth, and the connection with other queer and marginalised artists that led to it existing. Mostly, it comes in the form of Backxwash herself, who despite all the pain, sounds as persistent and urgent as ever.