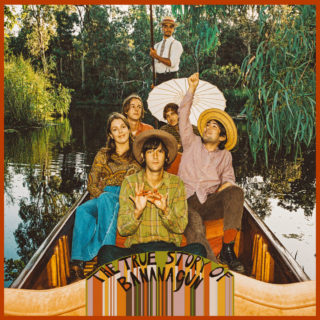 Have you ever dreamt of going on an adventure with a cartoon dog? Be honest, you have, haven’t you? It’s nothing to be ashamed of, we all have, at one point or another. Anyone who says different is a liar. Everyone loves a daydream, and right now a trip through the jungle with a jovial pup sounds like heaven.

I hope this doesn’t come as news to you dear reader, but unfortunately in the real world cartoon dogs don’t exist. Thankfully though, there is an alternative: the musical stylings of Bananagun.

On their debut album, The True Story of Bananagun, the Melbourne-based group have delivered what can only be described as 40-odd minutes of adventure dog music. In fact, the album is so tailor-made for this sort of hyperactive daydream that I refuse to believe the group had anything other than cartoon canines in mind during the recording process.

The groups relentless energy oozes out of each and every song. From the ’60s psychedelic bop of ‘Bang of the Bongs’ through to ‘Taking the Present for Granted’ you’re taken away from reality and sent hurdling into the fun zone.

That’s not to say the album is one paced. In between all of the frantic psychedelia are a couple of funky afrobeat gems. ‘The Master’ swaggers along like a Sunny D-fuelled version of The Go! Team, while ‘People Talk Too Much’ brings the albums greatest moment, delivering a twisted, beach party groove. The sort of beach party populated by parrots, turtles and – you guessed it – adventure dogs.

So, the next time you’re in the need of a bit of an escape, just sit back, whack on a bit of Bananagun and let them do the rest. The cartoon dogs are waiting.