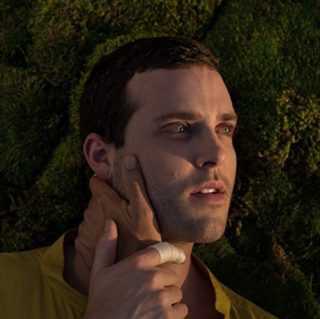 Will Wiesenfeld’s been living in his passions – games, anime, and other quiet moments of fantasy. His recent project under the name Geotic acts as a soundtrack to these comfortable moments, with celestial, enveloping electronics. What began as music for him to sleep and live with became another passion to dive into. He deserves the calm.

‘Obsidian’, his last album under the Baths moniker, was an excavation of personal fears. On ‘Yeoman’, dreams are more than just a distraction: they’re an essential escape, a way of surviving. Geotic’s soft textures are worked into moving vocal-pop songs, here, the most instantly satisfying Wiesenfeld has written.

‘Yeoman’’s title track is childlike, but richly constructed with wisps of falsetto and tumbling synth lines spiralling everywhere. ‘Extrasolar’ is a stadium anthem, whittled into a buoyant space daydream; wrapped in headphones, it feels made for you. On ‘Human Bog’, Wiesenfeld’s identity is crumbling: “I’m queer in a way that’s failing me / everyone alive lives fuller lives than me.” Even in untainted fantasy, the dissonance of reality feels close behind. Wiesenfeld’s attractive solution is to run, and with songs like this, you want to go with him.