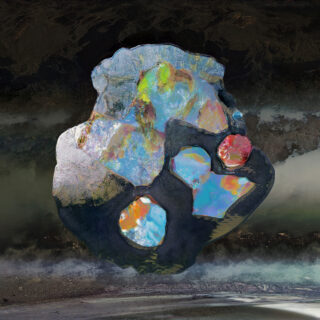 As the mind behind influential Bristol-based label Timedance, Batu has helped shape the sound of the UK underground. In the wake of dubstep’s international combustion, a distinctly British form of techno (for lack of a better term) was formed over the course of the last decade. By combining soundsystem heft, techno hypnotism and UK grit, the outcome has been widely eclectic, simultaneously club-ready and head-bending, and at its best, genuinely contemporary, neglecting tired romanticism in favour of continued exploration.

Besides the label curation, his own productions have played a strong part in moulding the landscape. Following a decade of singles and EPs, Opal stands as his debut album, and the extended running time allows for a more ruminative approach. Second track ‘Mineral Veins’ in particular asserts its presence with restrained measure, with only a foreboding handpan motif leading the way through the atmospheric murk, remaining endlessly intriguing in its considered simplicity.

Elsewhere, Batu’s usual hand for percussive tension is evident, and overall, the whole project is instinctively calibrated for club soundsystems. The exploitation of space, the subterranean bassweight and the antagonistic rhythmic patterns that appear periodically are pure dancefloor puppetry. Tracks like ‘Even Here’ and ‘Squall’ goad you onward, particularly the latter, with its evocative topline percussion shifting constantly and redirecting you sense of pacing.

The through-line is one of beautifully-crafted sound design. From the evocative suspense of ‘Mineral Veins’ to the aqueous, free-flowing melody of penultimate track ‘Eolith’, an environment is set, and the project does well to inhabit it.