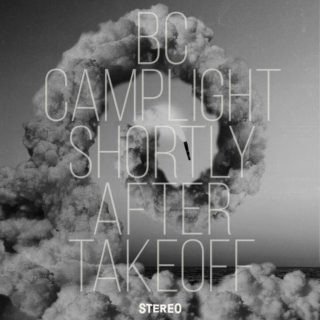 The story of Brian Christinzio, and the subject matter of much of his work as BC Camplight, is characterised by hard luck: being estranged from his new home, his girlfriend and his dog, being deported and banned from the UK following visa issues, therefore unable to promote his debut record. Once resolved and resettled in Manchester with an Italian passport and only a few days until the release of his second album, his father unexpectedly passed away. Enter the third and final release in what he now terms his Manchester Trilogy.

With Christinzio’s penchant for bleak humour at the forefront, Shortly After Takeoff still deals with madness and loss in a way that catches you napping. ‘Ghosthunting’ starts with a stand-up comedy routine centring on his dead father’s ghost who looks like Pavarotti, moves like a caterpillar and smiles like Countdown’s Rachel Riley. “For the whole first half of this record I thought I had a really bad disease,” you hear him say above canned laughter, “turns out I’m just mentally ill.” That’s the beginning, and then it somehow morphs into a well-meaning Tame Impala diss track.

Above all, Shortly After Takeoff sounds better than any other BC Camplight record. As he moves through quiet balladry to soaring gameshow synth-pop and crooner rock’n’roll, Christinzio’s vulnerability is always rendered by melodramatic strings and a charmingly lysergic production, with the fine-laced theatrical flourish of Father John Misty’s I Love You, Honeybear and skewed trembling of Harry Nilsson’s Nilsson Schmilsson. But the highlights are the moments in which the record’s lingua franca becomes a musical tug-of-war, such as on lead single ‘Back To Work’, an aptly-timed apocalyptic grab of the briefcase after the world’s hiatus from their office jobs. Two songs unnaturally inhabit the space of one; a spaghetti sunshine Beach Boys harmony grates against a coarse, computerised voice, copy and pasted from an Orwell novel. It’s still BC Camplight’s grief, but its context makes it a dystopian anthem.