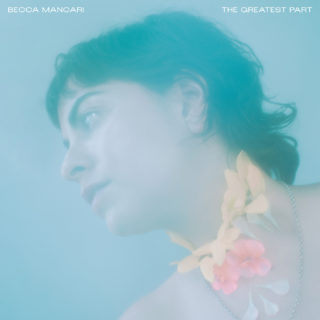 New York City-born folk singer-songwriter Becca Mancari’s second album The Greatest Part is a nice, relaxing lazy-day listen on the surface. Its arrangements are simple, delicate and charming. Mancari’s delivery is emotive but calm; the production is stripped down, warm and faintly nostalgic; its tempo is ambulatory. However, this makes it all the more baffling that it sounds so unsettling.

A closer listen reveals the ideas and delivery aren’t so simple, but painfully direct. The atmosphere isn’t of a halcyon childhood but one of fraught repression. This is not a soundtrack to Sunday brunch but a tense and unflinching confrontation with a traumatic childhood growing up gay in a virulently unaccepting Christian Fundamentalist household.

To truly evoke her past, Mancari bravely strips almost all of her first album’s celebrated country indulgences; instead revolving her sound around the East Coast indie cool she grew up with. It’s a daring but authentic reworking that liberates her songwriting and lyricism.

Abrasive album opener ‘Hunter’ inculcates us with a pervasive paranoia where threatening letters from a former church-attender implore her to repent for her sexuality. The no-frills-but-soothing ‘First Time’ details her memory of “the first time my dad didn’t hug me back”. “Like this” embeds Mancari’s fragile determination to not lose hope within a detached Staten Island dream-pop that perversely rationalises that “bad things happen to good people all the time”.

However, this record isn’t a prison for Mancari but a blissful transcendence. With its progression, the album becomes perceptibly freer, with dreamy synth lines floating through ‘I’m Sorry’ and a trippy undercurrent flowing beneath ‘Knew’. Album closer ‘Forgiveness’ feels cathartic as Mancari makes peace with her family who were simply “children raising children” while repeating the mantra-like “then you leave it all behind” in the fuzzy forgiving reverb of the coda.