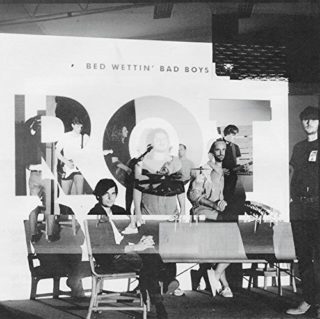 Few questionably-named bands ever manage to fully overcome their self-inflicted nominal misfortune. In the case of Sydney DIY foursome Bed Wettin’ Bad Boys – a band whose riotous craft has always vehemently rallied against suburban inertia and dejection – the final hurdle appears to be in sight. Four years on from their solid debut full-length, ‘Ready For Boredom’, ‘Rot’ is an eleven-track surge of condensed power-pop that fully benefits from the band’s strong knack for economy.

From recent single ‘Plastic Tears’ to ‘Away’ – a fist-clenched opening gambit summoning The Replacements at their most wanderlust-ridden – this is a record that bursts forth with rare, last-gasp heart. Lyrically tussling with some classic themes – namely work and what defines personal freedom – this is straight-up celebration rock in familiar territory. But while the jury might still be out on that name, BWBB manage to mercurially deflect from everything that’s come before via a breathless blitz whose refusal to give in is nothing if not thoroughly engaging from straight to finish.