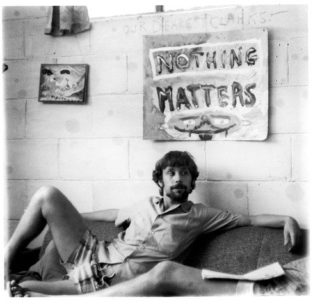 Brooklyn’s Benjamin Lazar Davis already has a somewhat impressive portfolio of bands and collaborations to his name, notable amongst them a co-writing credit on Joan As Police Woman’s latest album, and involvement with the venerable Okkeril River.

This though is his first release as himself, and after a musical history like his, setting out one’s own artistic identity might be a daunting thing. Album opener ‘A Love Song Seven Ways’ is a lyrically clever, very delicate song; that delicacy most obviously carried in Davis’ vocals, poised on the cusp of falsetto and floating on a bed of eighties-tinged melody. Stylistically, this music is something like Elliot Smith meets a low-key Yeasayer – pure-sounding, chilled out, sometimes downbeat pop, with the occasional backdrop of a big sounding drum track.

But songs like ‘Somebody’s Speaking For Me’ verge on the ponderous and there is very little real heft to the rest of ‘Nothing Matters’, which possesses a lightness that is sometimes beguiling but is more often just too faint to have any meaningful impact whatsoever. At times it flows very easily, and pleasantly, like a sunny, ephemeral daydream; but ultimately it lacks the strength to make you want to go back to it.