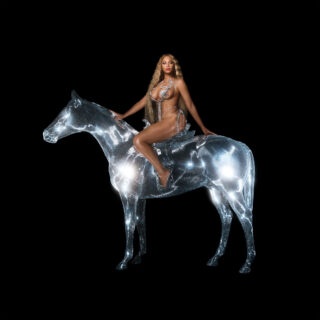 After two solo albums often remembered for their hefty personal narratives and visual spectacle, Renaissance is a reminder that Beyoncé can make you move. From ‘Crazy in Love’ to ‘Run the World (Girls)’, ‘Blow’ and beyond, her career returns to sweaty moments of dancefloor euphoria. Still, it’s common for her songs to be categorised under the vague monolith of ‘pop’ – even when she’s doing something more singular and eccentric than her chart rivals (take the decade-defining hit ‘Single Ladies’, whose idiosyncrasy often gets overlooked because of its omnipresence).

Renaissance explores what pop means to its creator. It’s a celebration of Black dance music, of disco divas, and of ballroom culture. It’s raunchy, camp, and constantly moving. Beats glide into each other to avoid breaking the spell. Like any good club mix, the many sample choices are less easy bait and more a map of inspiration. Icons like Donna Summer and Sheila E. rub up close with drag queen heroes like Moi Renee and Kevin Aviance. Through it all is a lyrical focus on sexual libration and self-love that connects the past to the present. What could be a pithy greeting card message in lesser hands becomes a thrilling ode to body music.

Renaissance is also the most vocally adventurous Beyoncé album, and her vocal command grounds the record. Take the dizzying embellishments on the cooldown soul of ‘PLASTIC OFF THE SOFA’, where she syncs with the bassline while moving from chest to head voice. She’s aggressive and flirtatious on ‘MOVE’, matching Grace Jones’s power over a threatening afrobeat instrumental. Her studied backing harmonies provide a satisfying call and response over these maximal club tracks.

Outside of a few moments, the album largely avoids the focus-grouped approach to dance music usually heard when pop stars explore house. Yes, the Right Said Fred interpolation on ‘ALIEN SUPERSTAR’ is a bit of a head-scratcher, and when there are so many good club flips of ‘I Feel Love’, ‘SUMMER RENAISSANCE’ is tame in comparison.

The rest of the record is loose and loveable. ‘PURE/HONEY’ is destined to live on in the very gay clubs it honours. ‘CHURCH GIRL’ represents Houston while taking gospel to the afterparty, while ‘ALL UP IN YOUR MIND’ is an opulent midnight drive featuring A. G. Cook that goes over surprisingly well. These are just pieces, but Renaissance was made to be taken as a whole. You’ll be exhausted and elated by the end of it.