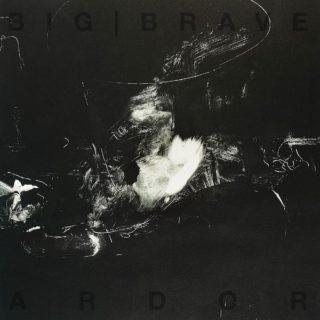 BIG|BRAVE live up to the former more than ever on their latest release. The Montreal, Quebec trio have consistently dealt in post-rock vaster than anything left of Southern Lord labelmates Sunn O))), and the three 10-plus minute megaliths that make up the length of ‘Ardor’ are fine examples of the bloody-minded formula they’ve been touting since 2014’s debut ‘Feral Verdure’ – so much so it eventually gets perniciously same-y.

Opener ‘SOUND’ unfolds Swans-like into a pendulous swagger, while ‘LULL’ counterpoints with an unexpectedly tender lament. Vocalist and guitarist Robin Wattie’s howls (“I miss you is all I can say”) writhe over the precipice between the muted hits of drummer Louis-Alexandre Beauregard and guitarist Mathieu Bernard Ball. This is BIG | BRAVE at their taciturn best – seemingly on the verge of unravelling. Violinist Jessica Moss (Thee Silver Mt. Zion Memorial Orchestra) and Contrabassoonist Thierry Amar (Godspeed You! Black Emperor) deftly deepen the crevices and shade the corners without tempering the group’s calculated din.

Sadly, once the finale ‘BORER’ comes around, we’re right back where we started with a routine death-groove. ‘Ardor’ is ultimately a conflicting record; by the time it comes to its long-overdue end, you’ll marvel at how a sound so awesome can become so trite.