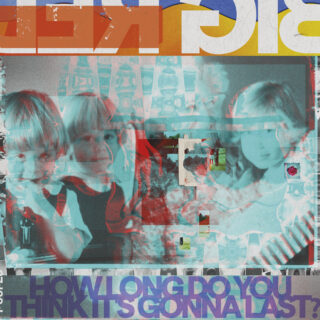 “‘How long?’ is what you asked, ‘how long do you think it’s gonna last?’” Well, couldn’t that apply to a lot of things? The opening lines of Big Red Machine’s second album are disarmingly pertinent. From the major chords and melodies that glide through you like a rush of wind, to the wistful whistling and effortless build, it doesn’t exactly lend itself to being the “experimental” side-project that Bon Iver’s Justin Vernon and The National’s Aaron Dessner billed this as some years ago, but it does capture a time. A quick glance at the wristwatch and years have passed, with social and economic catastrophes barely a memory. We’re still wearing masks, the climate’s still fucked and so is Loud and Quiet, but you can’t correct everything. ‘Latter Days’ sounds like Big Red Machine and Anaïs Mitchell remembering our current existence, sometime in the future. It’s the project at its best, with an evangelical but quiet melancholy and a campfire’s open arms.

And then Taylor Swift enters, and the songwriting changes. An outward-looking record seeming to skirt nostalgia tumbles through the egocentric narratives of folklore and evermore, which could still carry bandwidth in a Swift-times-Dessner world, but dilute a space created to explore the persevering originality of indie music’s comfortable luminaries. Vernon’s voice carries ‘Birch’, but is lost on ‘Renegade’. The highlights instead come from Dessner’s almost-embarrassed solo work (‘The Ghost of Cincinatti’, ‘Magnolia’) and first-time collaborations of Ben Howard joining This Is The Kit on ‘June’s A River’ and Fleet Foxes’ Robin Pecknold combining with Mitchell on ‘Phoenix’, lovingly tinged with the folk/psych euphoria of the Grateful Dead’s Workingman’s Dead. Over the course of an inconsistent hour, the lasting sadness is the ease with which Big Red Machine has waived its original goal; they’ve found an unclimbed mountain, and given up to sit on the first bench with a nice view.