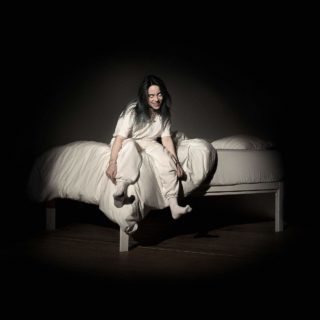 Before it was even out, Billie Eilish’s debut album had already broken a record so contemporary that you might not have realised it was there for the shattering. A week ahead of release, it had been pre-added by over 800,000 Apple Music users, which seems fitting for an LP this aggressively modern, as well as looking like the culmination of a self-fulfilling marketing prophecy (Eilish has had close ties to Apple since SXSW 2017). If the last 1975 record was supposed to be a defining musical moment for millennials, then Los Angeles native Eilish – still only seventeen – clearly fancies her chances of producing something similar for Generation Z.

Accordingly, then, When We All Fall Asleep, Where Do We Go? Is an eclectic, sprawling release that veers giddily through a stylistic slalom. The touchpoints are obvious, and at the record’s weakest points, distractingly so; ‘I Love You’ sounds like something that Lana Del Rey, not a woman known for her ruthless editing, would have left off Lust for Life, while ’8’ has been done a million times already by sub-par indie folksters. Plus, the only way you can tell ‘You Should See Me in a Crown’ isn’t a Lorde track is that the New Zealander has yet to suffer this catastrophic a trap-related lapse of judgement. The record’s successes are born less of structure or composition and more of delivery; Eilish has cultivated a hyper-specific niche for herself in terms of her presentation, from her softly barbed vocals – saccharine, but with a palpable undercurrent of venom – and her weird skewering of horror tropes, which help the lend the album a cohesive atmosphere that lands somewhere between witch house and early Odd Future.

The semi-regular reminders of the generation she’s positioning herself as a spokeswoman for play to her advantage, too; when you remember how old she is, the clumsier lyrics become endearingly gauche, and the sharper ones – and there’s plenty of them – cut deeper. One such stirring moment comes with the gradual realisation that the coolly delivered ‘All the Good Girls Go to Hell’ is actually a scathing indictment of mankind’s failure to tackle climate change, from somebody young enough to be around to suffer the consequences. ‘Xanny’, meanwhile, is not what you think; it firmly rails against her peers’ drug of choice.

In the end, When We All Fall Asleep, Where Do We Go? is a triumph of style over substance; it is lyrically in lockstep with Eilish’s generation and, superficially at least, ticks a more than enough of the requisite sonic boxes, particularly in terms of the production, to meet with the approval of the tastemakers. Musically, though, you’re not going to find anything here especially original, unless you’re not yet old enough to relate to Melodrama and too young to remember Pure Heroine. Which, come to think of it, Eilish probably is.