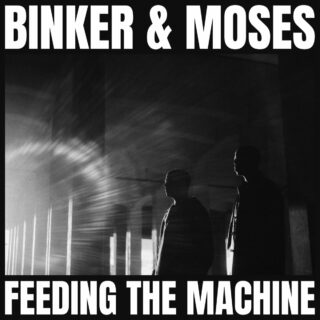 In a loose sense, Binker and Moses’ Feeding The Machine is a multiform sonic endeavour that exhibits zealous free jazz crossing tangents with ambient, electronic and minimalism. It’s the first studio record from London jazz trailblazers Binker Golding and Moses Boyd since their widely-acclaimed 2017 album Journey To The Mountain Of Forever. On this record they can be heard pushing beyond their own limits and mobilising a new sonic trajectory that is surprising and meditative in many ways.

The six-track album, recorded at Peter Gabriel’s Real World Studios by legendary producer Hugh Padgham, unfolds fresh musical idiosyncrasies from the very first track, ‘Asynchronous Intervals’. The 11-minute intro lays the foundation for the subsequent sonic journey via a sharp passage of saxophone, an undulated wave of what sounds like an elaborate introduction to an  emotionally-driven tale. Simultaneously, Boyd’s minimal yet complex drumming informs a counter-narrative that sits firmly against a see-through layer of electric piano and Golding’s weeping saxophone.

The album and song titles are evocative of a sci-fi dystopia, a theme that the duo has flirted with in the past. The record also features electronic musician Max Luthert as an honorary third member; his contributions on synthesiser and tape loops add a great deal here. While the primary focus on this record has been swayed away from melody-making through incorporation of electronic rhythms, a range of sci-fi poetics are made more concrete in Binker and Moses’ soundbed of instrumentals. On tracks like ‘Accelerometer Overdose’ and ‘Feed Infinite’, such themes are entwined within Feeding The Machine through unorthodox and expansive sounds.

‘After The Machine Settles’ suggests an aural paradox of a hopeful dread that, in a poetic sense, is also the climax in this sci-fi dystopia. It’s almost like a translation for the song title, a sonic collage of ambient sentences resonating within the space, minimal electronics that are remnants of an anthropomorphised machine, and an ambitious fabric of sax and drums. With the final track, ‘Because Because’, the cinema of the record finally settles down on a larger-than-life cosmic desert, gradually turning translucent and settling into the sand.