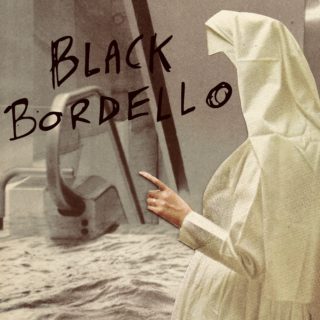 Experienced in jazz singing, Bordello was too much for past collaborators: too experimental a vocalist, too DIY a producer to face the daunting face of commercial music, too… much herself? She almost gave up, but eventually passion won out: Black Bordello formed in Peckham in 2017 before playing around London and releasing various singles, leading to this debut album.

It’s hard not to think of everything in the context of the Covid-19 pandemic and quarantine, including this album. That being said, these songs present an opportunity for escapism. Art-rock, melodramatic charm, and jazz roots meet to bring a fully encompassing listening experience.

Bordello’s deeply emotional vocals have garnered comparisons to Kate Bush, but there are also traces of Debbie Harry here. The sheer sonic depth of this record is a key strength: every song is an experience in and of itself, every song a point on the map of Bordello’s world. Strong vocals certainly lead the way, but echoing strings and jazzy percussion expand the songs into full-sized musical meals sure to engage listeners from start to finish.

It’s almost too hard to choose the best songs from this album; each one is so different and so essential to the image of the enticing environment that Black Bordello have created. A special mention must be made, however, to the highly enjoyable, 7-minute long ‘Baby’, the sound of a circus if David Bowie was ringmaster. On ‘Backache’, old-school garage rock rears its head, and somehow fits perfectly with the late-to-the-party funk bassline and mystical cymbal work. Aurally, the album is amazing, and the cherry on top is the fantastical lyrics. On ‘Weaning’, Orpheus gets a talking-to: “At the gates of the Underworld / they asked you why you turned around / your coward’s eyes sank to the ground / you thought you’d heard your lover’s sound…”

Things are hard right now, but sometimes escaping the real world for a little while is okay – especially if you can retreat into a record as creative and immersive as this one.