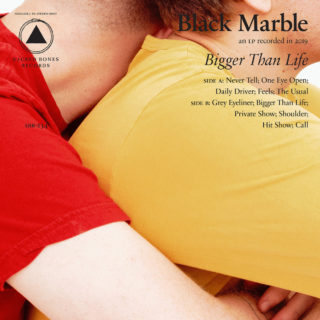 Chris Stewart’s morning commute sounds like a roller-coaster of societal sightseeing. Having migrated from New York with his long-term project Black Marble to his new LA studio hideout, his daily bus route winds through the high-rise bustle of the city’s business district and then down the dilapidated streets of Skid Row. It’s the relationship between these two contrasts that’s inspired his third album, Bigger Than Life, a record that wholeheartedly accepts the great disparity between people by recognising what ultimately connects them.

Whereas Stewart’s previous two releases (his 2012 debut, A Different Arrangement and 2016’s follow up, It’s Immaterial) scrutinised the darker corners of his own consciousness, Bigger Than Life reflects selflessly on the observations that surround him. This new outlook unveils a pensive, more discerning stance between Stewart’s lyrics. Each track sifts through motoric beats and vintage synthpop melancholy that leaves a lasting impression.

His retrospective ethos to making music mixes staccato analogue technology with untouchable simplicity, giving Bigger Than Life unmistakable character and identity throughout. His voice sounds distant but immediate and stands resolutely at the forefront of the production making the vocal hooks most memorable. It’s a maturing, more adventurous instalment and one that highlights Stewart’s unique song writing savvy.