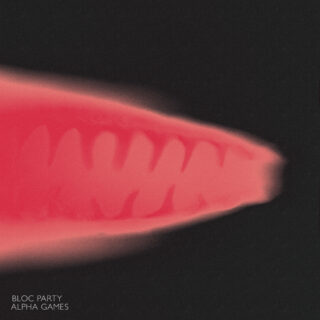 Bloc Party have always been a band to divide opinion. Whether it’s the ‘A Weekend In The City is better than Silent Alarm’ debate, the argument that they should have called it quits amidst a series of 2010s lineup changes or, more recently, on the topic of frontman Kele Okereke’s inclination towards seedy, Kaiser Chiefs-meets-’Strip That Down’ era Liam Payne lyrics.

It goes without saying, then, that the sharp and sleazy rock on Alpha Games will  have its critics. In-keeping with Okereke’s habit of switching up the band’s sound with each new release, the album ditches the tangled electronic gospel of 2016’s Hymns and instead opts for a more acerbic approach. With guttural guitars and a sense of anger that is an inevitable product of its times, Alpha Games is a simultaneous glance over the shoulder to the band’s rockier roots and a dynamic lurch forward to the punkier pull of the present.

Opener ‘Day Drinker’ is a simmering track of dramaturgic hooks and lofty lyrics, while ‘You Should Know The Truth’ reads more straightly from the modern indie playbook, with playful guitar lines and an earworm chorus. Hissing and contorting around like its reptilian namesake, ‘Callum Is a Snake’ is a bit more sinister, with a nod to the current trend of snarling spoken-word vocals strewn amongst rollicking riffs, before ‘Rough Justice’ offers itself as a strutting, swirling cut that feels a little bit like being cornered by a shady figure in a seedy bar as it seesaws between heady, dance-driven choruses and bursts of razor-sharp rock.

As a whole Alpha Games is a record defined by its sleazy punk theatrics: jagged guitar lines, campy vocal delivery and lyrics about “the boom boom room” and “strutting round here in those pum pum shorts.” Like any cult ’00s band trying to usher a few sordid lyrics and spiky guitars into the restless tumult of our current musical landscape, Bloc Party are bound to be met with a couple of sideswipes. But, the internet is full of people telling us indie sleaze is on the comeback – so what’s there to complain about at all?