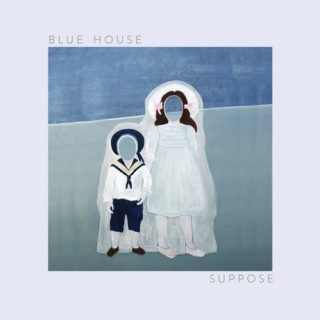 What does the term ‘indie’ actually mean these days? Perhaps in answer to that question, James Howard (formerly of art pop group Fiction) and Ursula Russell (ditto ‘junk jazz’ punk band Drop Out Venus) have come together to form Blue House, and this, their debut album, sees the pair combine to brilliant effect. Opener ‘I Found My Limit’ sets the tone with its sweetly sunny, slightly twee melodies shaped by a lovely, shimmery guitar sound. The duo share (and sometimes combine) vocals; ‘Ear To The Door’ sees chiming harmonies and a soaring vocal line.

The beauty of these songs lies in their simplicity and as if overtly acknowledging this there’s even a track named ‘Simple Song’. The hazy ‘Hot Air Balloons’ has an upbeat tempo, and sounds a little like Pavement on sweeteners, while ‘Albert Played The Euphonium’ is a true gem, something akin to an early Morrissey tune sung by Paul Heaton.

Of course it’s difficult to define what ‘indie’ really means in 2016, but if it does mean anything, then it’s music like this – a collection of engagingly lovely songs.