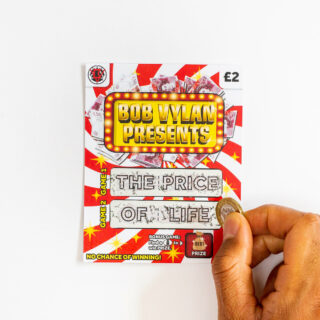 Sometimes you listen to an album and feel as though the artist has found the ability to articulate every thought that has passed through your mind, no matter how personal or universal the situation might be. Sometimes you find yourself unable to relate to the lyrics, but you’re so captivated by the instrumentation that you have no choice other than to keep an album on repeat.

On their third studio album Bob Vylan Presents The Price Of Life, London-based duo Bob Vylan speak the words at the tip of the tongue for most working class people of the United Kingdom and simultaneously provide a backdrop of furious punk and grime which acts as a conduit for channelling rage into. It’s almost as if they were aware before everyone else that alongside ever-present racial profiling and social injustices, we would soon be moving into all-out class war via to the current rises to the cost of living.

It’s an album for the people, written by the people who have always had the short straw. With lyrical motifs that are repeated in multiple songs, such as the antagonistic ‘Take That’ into ‘Health is Wealth’ (“They’re killing off kids with £2 chicken and chips / It’s a tactic of war waged on the poor”) and multiple disses to problematic leaders such as Margaret Thatcher and Winston Churchill, Bob Vylan craft a narrative which suggests we’re living in a perpetual cycle of neglect and being taken advantage of unless we choose to be the resistance. “Take a look at this place / It’s a fucking mess”, they bellow on ‘He Sold Guns’, and let’s be honest – they’re right. Rather than be passive over socio-political matters, Bob Vylan are asking us to be proactive. To kill the archaic laws of our society; to let it burn and see what changes will rise up from the ashes.