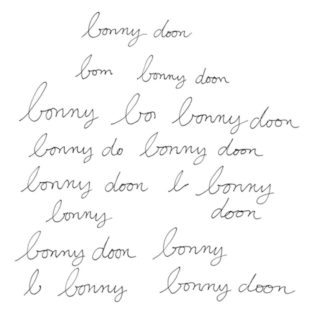 Restraint and melodic vulnerability have been a fundamental part of Bonny Doon’s work since the band’s emergence on the Detroit DIY scene. Collaborating since 2014 with drummer Jake Kmiecik and bassist Joshua Brooks, songwriters Bill Lennox and Bobby Colombo began Bonny Doon with a somewhat unorthodox approach to the archetypal punk they had long been acquainted with. Indeed, a deconstruction of their sound and an attempt at playing their music as quietly as possible made way for Lennox’s poignant lyricism and allowed the band to come into their own.

Bonny Doon’s eponymous debut album is, at its core, one that manages to cloak crushingly maudlin sentiments with deceptively blasé guitar lines and sunny hooks. It takes its almost-sung vocal cues from Stephen Malkmus and its musical ones from his Silver Jews – the drum skins barely unsettled, the guitars on the opening ‘Relieved’ walking up and down the instrument’s neck mildly sloshed, like automatic writing. When the band then pick up on ‘Lost My Way’ they’re more like Parquet Courts… just better.

A record underpinned by gently stoned vocal narratives, ‘Bonny Doon’ presents a feeling over logical romanticism that perfectly offsets Detroit’s post-industrial aesthetic and punk grit in a way that is refreshing for the city, regardless of how pedestrian it would sound bumming around Big Sur.