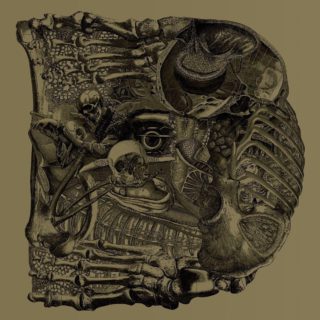 ‘Dear’ sets off like an electric razor running out of battery on your cheek, leaving half a beard and tremors in your bone. The Japanese power trio’s latest LP skims from the avant-garde to straight-down-the-line stoner/doom rock – sometimes in the same song. The less conventional moments are the most appealing, alongside gratefully-received seconds free of arch-sincere anthemic emotional metal singing.

‘DEADSONG’ best sums up the album’s troubling dynamic, a deranged soundscape that turns into a significantly less interesting whine-along. Similarly, ‘Kegero’ begins with pedal growls and pulses as the guitar is subjugated to the will of delay and distortion, but, unfortunately, turns into something much less haphazard or nefarious.

At the other end of the spectrum lies ‘Absolutego.’ It’s stoner-rock by numbers, the kind of track that could have had a grainy video and earned heavy rotation on late-1990s/early-2000s MTV2. To some that will sound appealing, but it’s a little prosaic to my ears. Indeed, only so much squealing sustain on your solo is strictly necessary before entering the dreams of bitter music shop worker with Ibanez ‘axes.’

Then guess what comes next? An end/punctuate sustain squeal with Sabbath chord progressions. If you play the song three times in front of a mirror, a man in a black T-shirt will appear and try to sell your younger cousin a Squire Strat, amp, lead and strap package.

The best songs here are weirder. ‘Beyond’ is delicate and creepy. It zones out into some scrubbing and scratching and swells into one of the more interesting crescendos that the album has to offer.

‘Dear’ excels in gurgles and squelches but the more standard use of guitars is grating – overly serious and not exciting. Twenty three albums in, yes, a real lasting achievement, but I don’t think that it will end up being Boris fans’ first choice listen.