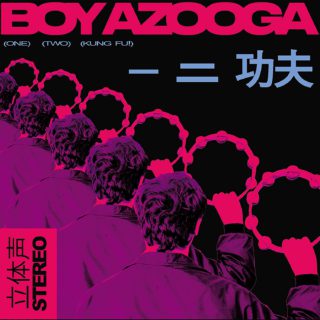 Chances are you’ve already heard ‘Face Behind Her Cigarette’, the airwaves-dominating single from Cardiff-based Davey Newington and his band Boy Azooga. Inspired in part by William Onyeabor, it’s an undeniable radio belter that pays homage to the Nigerian’s signature analogue keys and the infectious funk sound. Paired with crunchy production that recalls King Gizzard & The Lizard Wizard’s jazz-leaning album Sketches of Brunswick East, it’s easy to see how Boy Azooga have found a home on Heavenly Recordings – they’re jovial, harmonious and abundant in youth.

It’s also this year’s go-to tinnies-in-the-park soundtrack. From the psychedelic jam-band vibes of ‘Taxi to Your Head’ – which has licks of Tame Impala at their spaciest – to the whimsical park bench musings of ‘Hangover Square’, Newington and his band effortlessly thread together the soul, jazz, disco, and synth-pop influences young crate diggers are currently going nuts for, and that acts like Tame Impala and Caribou have been pushing ever forward to the mainstream.

That being said, if you prefer your songs without naval-gazing lyrics about standing around at parties, walking through parks or getting trains to Brighton, this isn’t the album for you. ‘1,2 Kung Fu!’ is at its core a vibrantly youthful album, one that’s fresh-faced with sprightly suburban stories. It also extends Onyeabor and his Nigerian funk peers’ highly influential reach beyond the record store heads.

So it’s a robustly accessible album that’s as breezy like a pocket fan to the face on a hot summer’s day. The band take cues from the full span of the Heavenly roster: Hooton Tennis Club’s mellifluous indie rock; Temples’ stadium-sized psychedelia, and of course King Gizzard’s genre-hopping diversity. It’s no surprise that Newington spent time drumming in Charlotte Church’s Late Night Pop Dungeon too – this is an album brimming with sheer alt-pop joy, one that wouldn’t be out of place soundtracking the next big coming-of-age film.