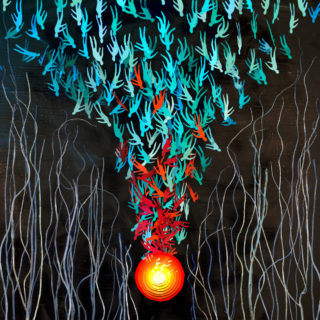 “Good evening ladies and gentlemen,” says a voice in Spanish at the outset of the new Bright Eyes record, over the noise of a ringing soundsystem and the warm bustle of a small room. “We are very excited you’re here with us tonight. Join us as we walk through the long hallway and exit through the doors of memory and forgetfulness. Let’s give the warmest welcome to the stage to “Your Vivid Nightmares,” performing their latest composition ‘Pageturner’s Rag’.”

It’s nice to find Bright Eyes keeping with their own tradition, newly reformed from a decade’s hiatus. Most of their albums across the last twenty years begin like this, with a found sound or spoken word monologue which loosely preambles the music to follow. Fevers and Mirrors, a record about emotional upheaval, starts with a child reading a book about a dinosaur moving house; Lifted opens its hour-long meandering with the gentle lull of traffic, and Saddle Creek’s Rilo Kiley finding directions; the double release of I’m Wide Awake, It’s Morning and Digital Ash spiralled through the dying panic of an aeroplane crash through to a waking dream (“shhh… don’t talk”). It sometimes feels  that you’re not really meant to be encroaching on these parts of Bright Eyes’ worlds. Take Cassadega, whose muffles are titled ‘Clairaudients’ – noises that exist beyond the physical capacity of hearing – or The People’s Key, mystically preaching “you have to believe in the future”, before the band promptly disappeared for the next decade.

But Bright Eyes’ tenth studio album Down In The Weeds, Where The World Once Was starts with an announcement in the public sphere. It’s the first time that you feel actively invited in, that this is something you’re meant to experience (even if the only words an English-speaker will recognise are “Your Vivid Nightmares”). ‘Pageturner’s Rag’ plays out like an eerie waltz in the depths of a horror film – a sickly-sweet dance that never ends. When chatter breaks through, it’s uncannily pedestrian; a middle-class voice philosophises the need to maintain hope, swiftly interrupting itself with pictures of her children, questions of where to find the best nannies and how to look after a rosebush. There’s no second part to this introduction as has come to be expected. Usually a cheery strum breaks out from Bright Eyes’ fantastical beginnings like a camera panning back to the main story. Here it just ends.

So much of the album follows suit. Conor Oberst’s sentiments feel artificial; his characteristic penchants for lyrical surrealism, wading into the depths of minutiae, are swapped with a straight-talking, clichéd vocabulary. ‘Dance and Sing’ breeds inaction, finding a placid existence despite living through crisis: “all I can do is dance and sing” is music’s equivalent of fridge magnets that tell you to “dance through the rain.” ‘Just Once in The World’ continues the apathy; the world is dying, we’re fucked, so let’s just forget everything and have one more good night out. His usual poetic refinement is overridden by platitudes, like he’s desperately trying to say as many things as he can in under an hour. “I’ll be your shield!” “Walking on air!” “Scream from the mountain tops!” “This will go down in flames!” A verbal sightseeing tour takes us from Stonehenge to the White Cliffs of Dover, with “smoking guns” and “blasts from the past”. “Look quick,” he says in ‘Mariana Trench’, “is there something you missed?”

The frantic rush doesn’t damage the silverware, though. The singles are as good as Bright Eyes has ever sounded. ‘Persona Non Grata’ is quietly reworked from the single edit, with the piano brought forward in the mix, engulfed by its own gorgeous slow dance. ‘Mariana Trench’ is an evocative story of human damage. So many of the band’s great lyrical conquests have set out with an aim of finding the physical point within an abstract, from the bottom of everything to the centre of energy, existing on the precipice where drunk talk meets genuine profundity. But their sonic explorations in Down In The Weeds reach new heights, too. ‘One and Done’ ends in an orchestral noise climax, while ‘Calais to Dover’ has two guitar solos (this, from a band without one in twenty years). While the worlds they’re espousing sound downbeat and hopeless, the process of writing them sounds joyful.

Bright Eyes have a knack for making music that gets better with age. Their catalogue is filled with a precocity that stays timeless for an adoring literati. To view Down in the Weeds within their own context, Oberst’s defeatism adopts a satire at the brink of earthly collapse, finally admitting their ruse: “if it’s not that important then why make a fuss at all?” (or indeed, why make a 14-song album?). And then we warp back into the opening scene, with the chatter and indifference, and a man tells them to turn off the microphone.